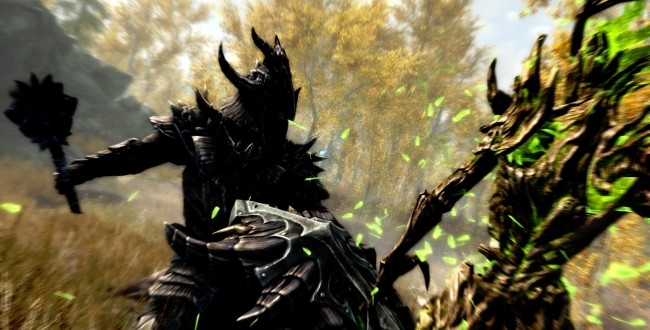 With the launch date for the new Skyrim reboot just a whisker away, Bethesda has decided to wet our ravenous appetites with a sumptuous teaser from the creators of this epic fantasy saga.

Live with youtube gaming has released an exclusive taster on the 20 October showing off what’s in store with the latest installment to reach our eager, sweaty palms.

Skyrim remastered will hit our shelves on Oct 28, for the Xbox One, PS4 and PC platforms.

Bethesda have notified the swarms of its cult followers that the developmental phase of the game is now complete.

The release brings refreshing news for green- eyed console fans, who will for the first time have access to mods. Other welcome news is that PC gamer’s who already own a copy of the game and all three of its DLC content will be be entitled to a free copy, with special discounts available on the DLC packs.

What does catch the eye after studiously going over the fresh Footage, is the plethora of visual enhancements, with pop-in delay for the environmental backdrops drastically improved. In addition the graphics look sharp, well rounded and more distinctive.

Most notably the equipment and gear looks ultra realistic, with increased definition to shapes, and textures clearly re-imagined.

It is evident that the game-play mechanics have received a radical reboot too. The enemy AI in relation to speed and responsiveness is vastly improved, making those melee moments more dramatic and intense.

Finally I noticed that the art and effects have been have revived and polished with subtle tweaks to heighten the experience.

PS4 players lucky enough to experience the game on the PS4 Pro, will have the opportunity to play in 4K.

Previous The stunning Kingdom Hearts returns
Next Rockstar : The Legacy