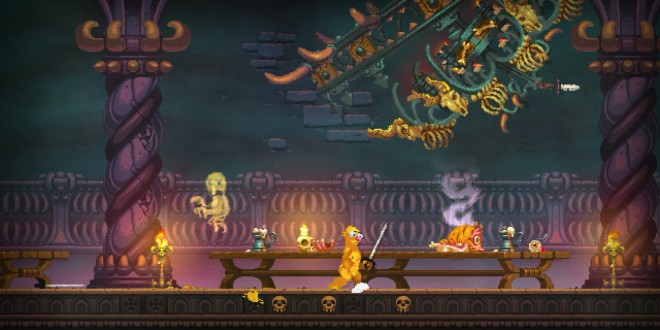 Indie games have produced quite a few gems over the years. From the finely crafted experiences that imitate AAA gaming, to the more surreal and bizarre. In fact, quite a few indie games tend to lean towards the unusual and unnatural. In an untapped market with lower stakes, more unconventional realms can be explored. Such was the case with Nidhogg. A weird little game by Messhof that focused on bloody fencing between two players. Players would try to force their way towards another end of a corridor while stopping their opponent from doing the opposite. If they succeeded, they won. And got eaten by a giant worm for their troubles. Now, Nidhogg 2 is in the works for people who are in the mood for more fast paced weirdness, as announced some months ago. There is now even more news. The game will be released on the PS4, and is aiming for a 2017 release.

Messhof plans to build on the original formula with a bit more of everything in Nidhogg 2. In the original, combat was pure swordplay and bare knuckle brawling. A player’s sword could be thrown to act as a ranged attack, but there was little more to be done. In Nidhogg 2, there are a lot more tools of death. Knives, battle axes, and bows and arrows are coming to the new game. Each one has its own unique combat style, something that will complicate the already hectic battles of Nidhogg. On top of that, new levels and OSTs will be present in the game.

The appearance of Nidhogg 2 is also a radical departure from the original game. The first Nidhogg utilized simplistic graphics, so simple that they evoke memories of the Atari 2600 The sequel will use much more complex designs, all done by Toby Dixon. Although, this is proving to be a rather divisive aspect of the sequel. While some are fond of the changes, others are not particularly pleased with it.  Trailers for the game have been severely downvoted because of this new artstyle. Whether this will prove to be a serious issue for the game remains to be seen.