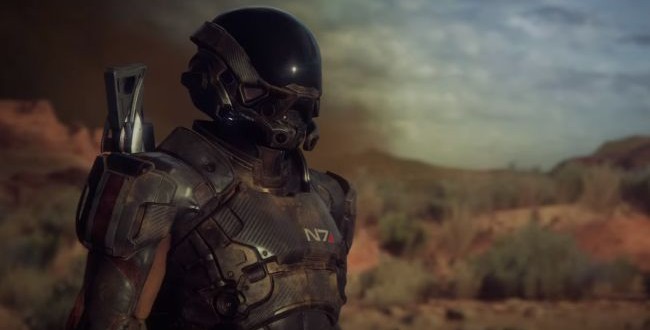 Mass Effect Andromeda is a game many people have been asking questions about. Mass Effect was a widely acclaimed and loved series, but Mass Effect 3 ended the original trilogy on a sour note. As such, Mass Effect Andromeda is seen by many as an attempt to wipe the slate clean. It is set around a massive sleeper ship traveling from the Milky Way galaxy to the Andromeda galaxy. A controversial move by Bioware that essentially leaves most of what was established by the original games behind. Something not helped by the lack of solid information about the series. As of now, though, fans have something to work on, as a gameplay trailer has been released.

There’s a lot crammed into the Mass Effect Andromeda trailer, and producer Michael Gamble has encouraged it be picked apart. Quite a bit stood out for me. Notably, the free roaming from the first Mass Effect is back, with a six wheeled APC acting as your transport. Combat is also much more fluid, with more abilities based on movement, such as a jetpack. Gruesome death scenes have been added for when particularly large enemies get the drop on you as well. For non-combat relate mechanics, a detective-like scanning device and crafting have also been included.

The trailer also goes beyond talking about gameplay and reveals a fair bit about the story of Mass Effect Andromeda. First and foremost, the species of the Milky Way are not united in this new galaxy. Break offs from their society have formed run down looking outposts, and aren’t on good terms with everyone else. The Andromeda galaxy is described as not being a particularly friendly place. Planets are either hostile or uninhabitable, with resources being hard to come by. Why this is the case has yet to be revealed. In fact, much about the Andromeda galaxy has yet to be revealed. We have yet to see a native species of the galaxy, for starters. It seems that we’ll have to wait for all of our answers to be finished. Until then, this will give fans something to develop their opinion with.

A life long game and half life long writer, David always sought to combine his passions and write about games online.
Previous Mean Streets of Gadgetzan Free Packs
Next Overwatch wins Game of The Year 2016 at The Game Awards