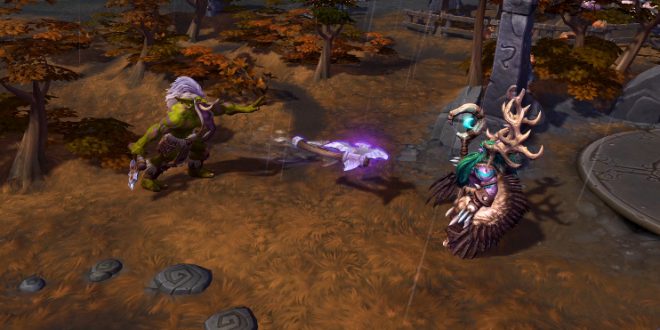 Heroes of the Storm, Blizzard’s 2015 foray into the MOBA scene, has a new character joining its roster of combatants. Zul’jin, Warlord of the Amani was revealed by Blizzard today along with detailed information on how he functions as a Hero. Zul’jin fills the Assassin role in Heroes of the Storm, and uses his axes and unique Berserker mechanic to cleave down his foes. Blizzard gives a little bit of back story on the introduction of this Warcraft legend on his character page here:

“Before the elves and their Alliance, the forests of Lordaeron belonged to the trolls of the Amani empire. As their warlord, Zul’jin has united the tribes into an army that stands ready to take back what is theirs and to slay the elves who stole it from them.”

Zul’jin’s arsenal of abilities was released as well, and is summarized below:

Q: Grievous Throw – Zul’jin throws an axe forward, dealing 130 damage to the first 2 enemies hit and marking them for 8 seconds. Marked enemies take 50% bonus damage from Zul’jin’s next 3 Basic Attacks against them.

E: Regeneration – Zul’jin channels to regenerate 25% of his maximum Health over 4 seconds. Moving while channeling or taking damage will interrupt this effect.

R1: Taz’dingo – For the next 4 seconds, Zul’jin is Unkillable, and cannot be reduced to less than 1 Health. Taz’dingo!

R2: Guillotine – Zul’jin launches a massive axe into the air that drops on the targeted area, dealing 210 damage plus bonus damage the lower his Health is.

Zul’jin is shaping up to be an interesting addition to the Heroes of the Storm team. The Berserker trait offers a high-risk high-reward style of gameplay, incentivizing draining your health for increased damage and punishing poor timing with the ability. One of his Heroic abilities, Taz’dingo synergizes well with the trait, allowing Zul’jin to eke out extra damage and allowing him a short invulnerability to make plays.

Tags Heroes of the Storm MOBA PC World of Warcraft

My name's Zach and I'm a college student supporting myself with freelance writing as I finish my degree. I largely focus on technology news and reviews for LoadTheGame, though I do report on games from time to time.
@zr566762
Previous Studio Zero Launched by Persona 5 Director
Next Blizzard Recaps 2016 and Outlines Overwatch Plans for New Year