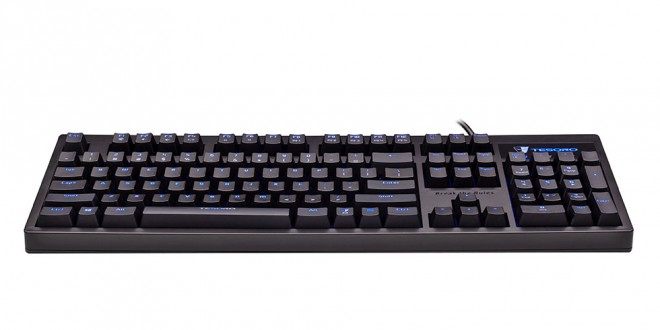 Gaming keyboards are one thing. Mechanical gaming keyboards are an entirely different thing? Why? Because for professional gamers or enthusiasts, the technology under the keys is just as important as fancy macro keys or colored backlight features. This is something that the guys at Tesoro, a perhaps lesser known gaming peripheral manufacturer, seem to completely understand. The Tesoro Excalibur RGB is their attempt to eat a slice from the gaming keyboard market, and combines a budget-oriented price with the advantages of a backlit mechanical keyboard. Is it any good though? Let’s find out!

Don’t expect anything over the top with the Excalibur. The keyboard is well tucked into its box, but other than that, there’s nothing really surprising. You’ll get a small brochure that highlights other Tesoro gaming peripherals, as well as a small manual that explains the basic functions of the media keys. No software is included, so you’ll have to download the keyboard’s software from the official website. The “Sword of King” description for the keyboard’s name is a tiny bit hilarious, but hey, the company isn’t US based, and this is just a minor nuisance, so let’s not nitpick.

The Keys and Software 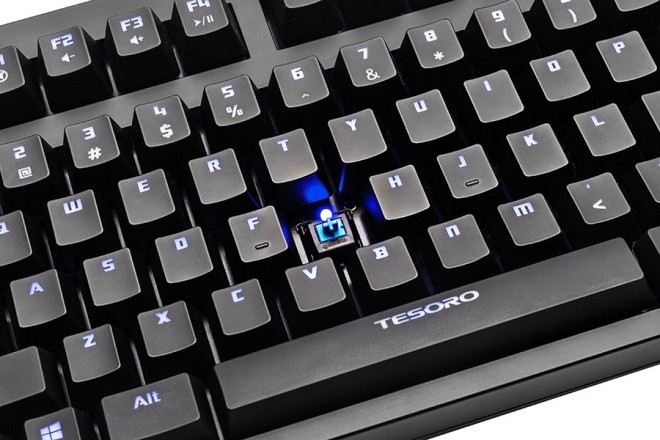 If you don’t know much about mechanical keyboards, here’s the gist of it: they are loud (generally speaking), but highly efficient, due to the Cherry MX switches that they employ. There are several variants of the Cherry MX switches, from highly sensitive ones to less tactile ones. The advantage of using these switches is that your keyboard will detect individual keystrokes without limit (anti-ghosting), while being extremely responsive. A simple touch of a key will activate its command, without the end user having to push the key fully for the desired effect.

Now, Tesoro doesn’t use original Cherry MX switches, due to the high cost of these, and instead uses replica switches. This might sound like a turn-off, but it’s really not. After extensive testing, we’ve found no tangible differences in how effective these replica switches are, and they should still last you a few million keystrokes each. Whereas most mechanical keyboards cost way above $100, the Excalibur has a reasonable price-tag of $89.99. The keyboard doesn’t offer a lot in terms of additional macro keys and the like, and has a very standard layout. This can be both a plus and a minus, depending on your personal preference. I personally almost never use macro keys, so not having them doesn’t bother me, on the contrary. It saves space on my desk and ensures I get a layout that I’m highly familiar with. Additionally, the shape of the keys is pleasant, with no chance of your fingers sliding off to adjacent keys by accident. Especially for someone who types a lot, this is a huge plus.

The keyboard provides a 1000 MHz polling rate, meaning it’s highly responsive, and also provides the option to switch between G-Keys and N-Keys. It also includes a 512 KB on-board memory for storing macro profiles, which you can easily set up via the keyboard’s software. While not included in the original packaging, the software is easy to download, and you should definitely consider installing it, as it allows amble macro customization options for all your gaming needs, without the need of additional 3rd party software. With 5 profiles and every individual key being customizable, there’s definitely a lot to play with.

The Tesoro Excalibur keeps things simple. It’s black, with a standard layout and a rubberized back that prevents the keyboard from moving. The rubber is particularly effective, more so than let’s say my older Microsoft Sidewinder’s, which does on occasion slide in various directions. The only downside of its design is the lack of a palmrest, which can take its toll over extended use. Other than that, The Tesoro Excalibur looks and feels good, with nothing out of the ordinary. If you’re worried about leaving fingerprints or grease stains, rest easy, the keyboard is not sensitive in this regard.

And now let’s get to the good part. The Excalibur is completely backlight. The backlight can be adjusted, from intensity and color, to several templates that allow you to have only some of the keys light up. For instance, you can have the WASD keys, along with the spacebar, direction keys and F9-F12 keys light up, with the rest of the keys remaining unlit. From vivid red to bright blue, there are definitely plenty of versions to choose from in the keyboard’s RGB edition.

To sum it up, the Tesoro Excalibur brings nothing new to the table. However, what it sets out to do, it does well enough. It’s affordable (you can even find some sales online that take the keyboard’s price down to $69.99 for the holiday season), sturdy and reliable. Once I’ve gotten used to it, it made gaming and typing a breeze, although it does tend to be rather loud, so make sure you adjust your microphone sensitivity accordingly if you’re using Teamspeak or Ventrilo. A good backlight system, combined with a basic but solid design, a long enough USB-based cable and a solid software that allows ample customization ensure that the Tesoro Excalibur is a good investment. You’re getting plenty of bang for the buck, but you have to keep in mind that this is still a budget-oriented keyboard. If you want additional macro keys or original Cherry MX switches, the Excalibur is not for you.

The lack of a palmrest is also felt (at least in my case), and I feel that part could have been introduced without huge additional costs to the overall product. Still, you can’t have it all I guess, and for what it costs, the Excalibur is a solid investment that won’t let you know. It’s basic enough, but that’s not necessarily a bad thing. Less is sometimes more, and everything the Tesoro Excalibur RGB brings for its affordable price makes it easy to recommend.

Gaming keyboards are one thing. Mechanical gaming keyboards are an entirely different thing? Why? Because for professional gamers or enthusiasts, the technology under the keys is just as important as fancy macro keys or colored backlight features. This is something that the guys at Tesoro, a perhaps lesser known gaming&hellip;
Tesoro Excalibur RGB Mechanical Keyboard Review
Tesoro Excalibur RGB Mechanical Keyboard Review
Jacob Chambers

A solid keyboard that does a lot for what it costs. There's nothing fancy about the Excalibur RGB, but it has all you'd be looking for in a gaming keyboard - mechanical switches, customizable backlight and custom profiles.

Old-school gamer with a cheeky tongue that gets me in trouble. When I'm not playing games, I'm writing about them, preferably in the vicinity of a fridge! Oh, and if you're a Justin Bieber fan, I'm afraid we can't be friends!
Previous GTA V: Review for Next-Gen
Next Rockstar Confirms Work on GTA VI After Rumors 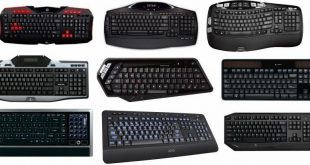 5 Hacks That Will Improve Your Gaming Skills Considerably