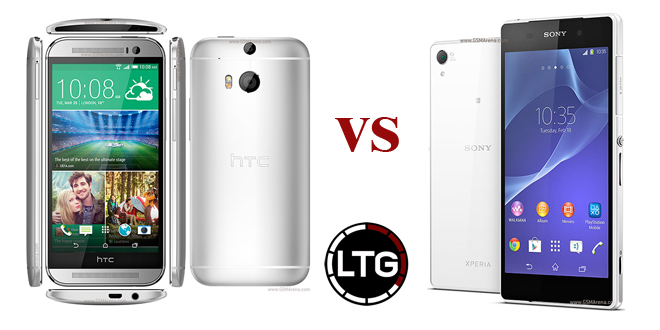 This year’s flagship phones have been released, and there are plenty of choices when it comes to high-end smartphones for those that want the best of the best and can afford it. Sony may have been struggling financially lately, but there’s little doubt that the Sony Xperia Z2, launched on the 24th of March, is anything but an impeccable smartphone that gets almost everything right. On the other hand, HTC isn’t one to shy away from a challenge, and the HTC One M8 also proves that a successful phone can be improved. Released on the 25th of March, the HTC One M8 replaces the original HTC One and brings multiple improvements.

Because you’ll be spending considerable amounts of money on either phone, it’s good to make an informed decision. Our comparison will highlight both the official specifications of both the Sony Xperia Z2 and the HTC One M8, and will try to determine whether or not one has a significant edge over the other.

The HTC One M8 is the successor to the popular HTC One, one of the best Android phones on the market. The HTC One M8 (also referred to as the HTC One 2) improves a lot over its predecessor, there’s no doubt about that. Increased storage size and a maximum of 128 GB? Check! The very best GPU and CPU available for Android devices? Check! A really good secondary camera? Check! Not all things are impeccable though, unfortunately. The HTC One M8 brings upgrades to its main camera, but overall, the new camera seems to be a bit lacking when compared to other upcoming or recently released phones. Battery-life on the HTC One M8 isn’t exceedingly good either, although the phone manages decent performances in day-to-day use. The display is impeccable though, and with 441 PPI, the HTC One M8 blows away competitors easily.

Priced slightly under the $700 mark carrier-free, the HTC One M8 isn’t a cheap phone, but still manages to provide great value. It’s a top-tier phone, and the price obviously reflects this, but it’s definitely not as expensive as we were anticipating. In fact, the price has been decreasing slightly since its release date, and some retailers offer it for as low as $650. For what it offers, how it runs, how it feels and how it looks, the HTC One M8 won’t have a hard time getting boxes off shelves!

Sony’s flagship phone for this season is the Xperia Z2, there’s little doubt about that. The successor to the expensive but popular Xperia Z1, the Xperia Z2 leaves many areas untouched (on the principle of “why change something that works”) while improving upon multiple features. The Xperia Z2 has a lot of things going for it. Hardware-wise, it’s top-notch, and includes the latest and the best available on the market. The CPU is capable of some impressive performances, while the increased RAM size is big enough to satisfy even the most picky of users.

The Xperia Z2’s display might not have the best PPI ratio on the market, but the display is actually damn near perfect. Don’t be fooled by the stats on paper, the Xperia Z2’s display is as close to flawless as you’ll find. With an IPS triluminous display, and the technology used ensures one of the best RGB color palettes out there. Natural, vivid colors is what the Z2’s display offers, and it’s simply a phone that you can’t take your eyes off.

The extra storage options aren’t bad either, and there aren’t a lot of smartphones that can brag about having 128GB (albeit via MicroSD) storage space. The camera is unchanged compared to the Z1, but that’s hardly a bad thing. You can’t ask for more than 20.7 MP, can you? The phone sports a remarkable design, and while it’s not new compared to other Xperia models, the Xperia Z2 still looks stylish and memorable. It certainly makes a statement. The only bad aspect of the Xperia Z2 is its price, which is hefty, to say the least. The phone will set you back around $850, which is not cheap by any standards. In fact, it’s one of the most expensive smartphones available, but if you can afford it, it rewards you with extreme quality all around.

Choosing a winner isn’t easy in this match-up. Both phones sport similarly strong hardware and are extremely fast and responsive. While on paper the HTC One M8 seems to provide better PPI and a bigger screen, in reality, the Sony Xperia Z2 outshines HTC’s offering. That’s not to say that the HTC One M8’s display is bad in any way. It’s not! Both phones have great displays, but the Sony Xperia Z2 outshines HTC this time around. The Xperia Z2 also provides an impressive camera that the HTC One M8 can’t match.

Design-wise, both are sturdy and good-looking phones, so which one is better-looking is in the eye of the beholder. We prefer the Xperia Z2 slightly over the HTC One M8, but the lower price of the HTC One M8 makes it a viable choice too. The gist of it is this: if you’re looking for great performance and value, the HTC One M8 is a great choice. It’s more in-line with the Samsung Galaxy S5, an equally good smartphone that’s priced similarly. If you can go the extra mile however, the Sony Xperia Z2 gets the recommendation. There’s not much you can dislike in Sony’s phone, except maybe for the price-tag, but you are looking for the very best overall.

To conclude, we’ll say this: the HTC One M8 provides better value for your money, but the Sony Xperia Z2 is simply the better phone. The decision ultimately lies within your hands!

Old-school gamer with a cheeky tongue that gets me in trouble. When I'm not playing games, I'm writing about them, preferably in the vicinity of a fridge! Oh, and if you're a Justin Bieber fan, I'm afraid we can't be friends!
Previous Samsung Galaxy Note 3 vs. OPPO Find 7 – Underdog vs Flagship – Prices and Specs
Next Tracking lost smartphones is easy, regardless of OS!