Breaking News
Home » OPINION PIECES » Path of Exile Challanges: The Next and Now 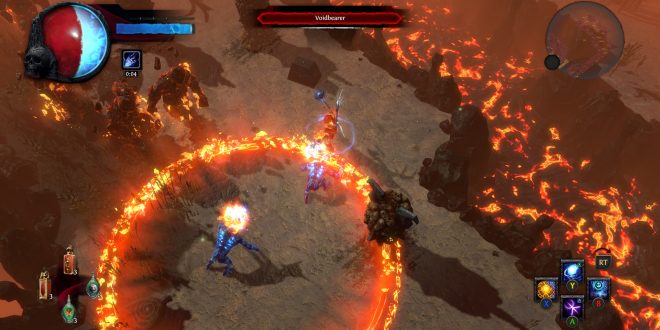 Have you been taking a break from Path of Exile? If yes, then there’s no better time to go back into the fold than right now, especially if you have plans to farm POE Currency. PoE is in the middle of a colossal challenge league with updates of its own and is already in the cusp of the next one. Still not convinced? Well, here is the big present and future of Path of Exile—we guarantee it’ll make you think otherwise.

Let’s begin with the things to come, as Grinding Gear Games has said that they will be revealing more details about the next major update on August 20. It should already go without saying that it’s going to be a new challenge league. As of press time, this new league has yet to be named, so we’ll have to wait for that minute detail.

Other than new enemies to fight and new items to obtain, the update will also improve upon older master content. For example, Sulphite and Betrayal states will be shared by all characters. Aside from that, you can count on the staple fresh content that comes with every league such as new items, archetypes, skill gems, and many others.

This update is already slated for release on September 6 and we’re very much looking forward to it. So if you plan on having a headstart by that time, then you should get strong with all the available Legion content. For this challenge league, the main antagonists are hordes of ancient and powerful elite warriors that have been locked away in the Dimension of Timeless Conflict. As Wraeclast’s fabled exile, the task of unsealing and finishing them off once and for all falls upon your shoulders.

In true Path of Exile league tradition, you’ll be getting special rewards for taking down these enemies, such as POE currency and gear. The stronger the targets, the better the rewards–this is especially true when it comes to leaders. Then there are also special enemies that have an icon on their head, telling players what specific items they yield.

Other than new content to take on, Legion also adds new items. The most important among them is the game-changing skill gems: Stance skills. Think of them as mana-reserving skills that have two modes that further affect other skills. They aim to promote versatility, giving players a certain edge depending on the situation, or at the very least some well-needed buffs.

The most popular one for this league is Blood and Sand. This skill has two stances, Blood Stance and Sand Stance, and affects certain skills. A good example of that is Cyclone. In Blood Stance,it deals more damage. In Sand Stance, on the other hand, it offers utility in the form of forward movement and blind affliction to nearby enemies.

Class Changes: One and All

The most important and longest-lasting update Legion has would be melee class revamps. This is to give players who want to go with melee classes as much of an edge as classes that are focused on spamming elemental AOE spells. This includes animation attack canceling and melee attacks now having a small conical AOE.

Beware though, because while the latter may be beneficial to players, it also applies to monsters, so you should be more careful of them. There are also more generic changes that apply to all classes, such as low-level movement skills and accuracy no longer capped at 95%. What you’re going to do with extra accuracy is all up to you.

Path of Exile is a rare kind of MMO; it gets better with age just like fine wine. Legion is definitely proof of that, and the next challenge league will definitely prove that once more. So, allow us to reiterate what we said in our opening statement: There’s no better time to return to Wraeclast than now!

I’m Load The Game’s co-founder and community manager, and whenever I’m not answering questions on social media platforms, I spend my time digging up the latest news and rumors and writing them up. That’s not to say I’m all work and no fun, not at all. If my spare time allows it, I like to engage in some good old fashioned online carnage. If it’s an MMO with swords and lots of PvP, I’m most likely in it. Oh, and if you’re looking to pick a fight in Tekken or Mortal Kombat, I’ll be more than happy to assist! Connect with me by email markjudge (@) loadthegame.com only
@@MarkJudgeLTG
Previous Nintendo Switch Portable Dock Receives Full Kickstarter Funding
Next Get Final Fantasy VII Remake For 25% Off While You Can

Forsaken Masters expansion has arrived to Path of Exile