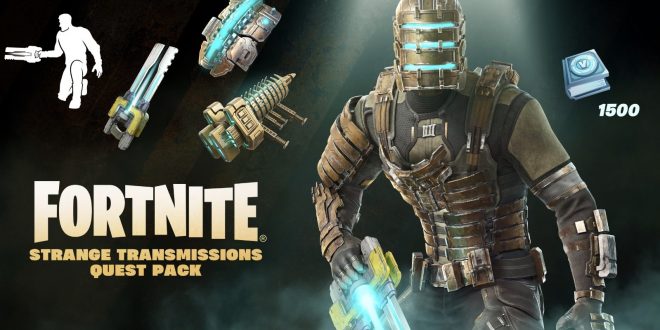 Isaac Clarke, the main character of the venerable horror/sci-fi series Dead Space, is the most recent character skin to be added to Fortnite. By taking on the roles of Isaac and Ellen Ripley, we can now realize our fantasy Dead Space/Alien crossover!

Think Goku, Naruto, etc. Isaac seems perfectly expected for Fortnite, making this one of the more conventional crossovers we’ve seen in a while. Additionally, the eagerly awaited Dead Space remake debuts on PS5 and Xbox on January 27, making the timing pretty darn ideal.

If you buy the Strange Transmissions quest pack from the Fortnite store for the standard £9.99/$11.99, you can get Isaac right away. A pickaxe, two back blings, Isaac’s outfit, and quests that can earn you up to 1,500 V-Bucks each are all included in the pack.

Grab the Strange Transmissions Quest Pack now which includes:
-Isaac Clarke Outfit 🚀
-Two Back Blings and a Pickaxe ⛏️
-Quests to earn up to 1,500 V-Bucks 🎉

We kind of like how the USG Ishimura, the abandoned mining ship that you explore in Dead Space, is replicated on one of the back blings. The pickaxe also functions as a plasma cutter.

Old-school gamer with a cheeky tongue that gets me in trouble. When I'm not playing games, I'm writing about them, preferably in the vicinity of a fridge! Oh, and if you're a Justin Bieber fan, I'm afraid we can't be friends!
Previous Here Are The Complete Patch Notes For The Breakers Collection Update, Coming This Week
Next Snipperclips, A Fantastic Co-Op Puzzler, Is The Upcoming Nintendo Switch Online Game Trial (Europe)