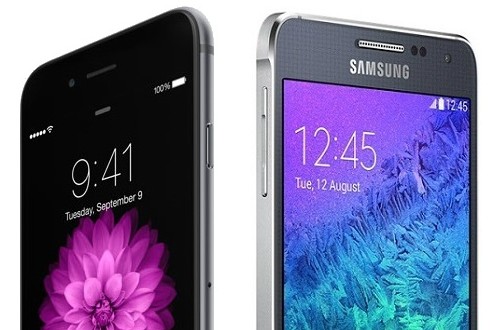 Samsung had a pretty good run earlier this year after the release of the Samsung Galaxy S5 flagship smartphone. The device was quickly dubbed by many “the best smartphone on the market”, but things changed pretty fast as competitors started to surface. Before the iPhone 6 there was the LG G3, which contributed a lot to the poor sales of the Samsung Galaxy S5 in the second quarter. For a while there people were saying that Samsung was planning on releasing a Prime version of their flagship in order to compete better, but we haven’t heard much about this device since then. Instead, the Korean tech giant came up with the Samsung Galaxy Alpha, a metallic smartphone meant to compete with the iPhone 6.

Well, the Samsung Galaxy Alpha is now available for purchase in certain countries and more are expected to follow in the near future, but did Samsung deliver on its promise? Seeing as how the iPhone 6 was also announced and detailed earlier this month we decided to make a comparison between the two and find out. Now, Apple announced two versions of its highly anticipated flagship, but we’ll only be looking at the regular iPhone 6 for this comparison as the iPhone 6 Plus is too big to be a suitable competitor to the Samsung Galaxy Alpha. Without further ado, let’s pit these two devices against each other and see what each of them can bring to the table.

The Samsung Galaxy Alpha features a metallic frame that’s definitely a welcome departure from the plastic design traditionally associated with Galaxy devices. However, this isn’t really an advantage over the iPhone 6 as Apple’s flagship also features a metallic design and more rounded edges if you’re into that sort of thing. It’s hard to say which of them looks better as they are both visually appealing, but the Samsung Galaxy Alpha definitely looks a bit more rugged. However, the iPhone 6 is generally considered to be a more comfortable device to wield so it really depends on user preference here. In terms of display, both handsets come equipped with 4.7-inch panels, but there is a slight difference in terms of resolution. While the Samsung Galaxy Alpha sports 720 x 1280 pixels and 312 PPI, the iPhone 6 offers 750 x 1334 pixels and 326 PPI. That being said, the Samsung Galaxy Alpha’s screen uses Super AMOLED technology, which offers more realistic colors than the iPhone 6’s LED-backlit IPS LCD display.

Hardware-wise, we’re seeing some pretty important differences between the two. The Samsung Galaxy Alpha comes in two variants, one sporting a Qualcomm Snapdragon 801 quad-core CPU @ 2.5 GHz while the other features the Exynos 5430 octa-core processor with four cores clocked at 1.8 GHz and four cores running at 1.3 GHz. I think most would agree that both variants feature some pretty impressive processors, but the iPhone 6 is nothing to sneeze at either as it comes equipped with the new 64-bit Apple A8 chipset complete with a dual-core 1.4 GHz Cyclone dual-core processor. A weakness of the device is that it only features 1 GB of RAM while its competitor can account for 2 GB. On the other hand, the Samsung Galaxy Alpha only has 32 GB of internal storage memory and there is no microSD card slot so that’s as far as it can go. Admittedly, the iPhone 6’s standard model only has 16 GB of storage, but Apple’s flagship also has 64GB and 128 GB variants so there’s definitely more diversity here.

Moving on to some of the other specs, we’re still a bit in the dark when it comes to the iPhone 6’s battery size as this was one of the few aspects that was not revealed yet. However, Apple did promise a much better battery than on the iPhone 5s and word on the street is that we will be looking at a 1,810 mAh unit. By comparison, the Samsung Galaxy Alpha features a 1860 mAh battery so a little bit bigger, but the difference is barely there. To be honest, both devices are pretty unimpressive in the battery department so it’s hard to recommend any of them based solely on that. Apple did promise various improvements that should help with the battery life, but we’ll just have to wait and see. In regards to the cameras, the difference is a bit more obvious as the Samsung Galaxy Alpha packs a 12 MP primary shooter with LED flash. The iPhone 6 only features an 8 MP camera, but comes with dual-LED flash and more features than its competitor so it’s definitely not bad either.

So far so good, but what about the price? Well. it’s no secret that iPhones are generally more expensive than their Android counterparts and things are no different with the iPhone 6. However, the Samsung Galaxy Alpha is a pretty expensive handset as well to be honest. Granted, we don’t know the official US price yet, but we do know that an unlocked Samsung Galaxy Alpha costs 699.95 CAD in Canada, which translates to about 637 USD. Meanwhile, a contract-free iPhone 6 is priced at $650 (16GB), $750 (64 GB) or $850 (128 GB). As expected, the iPhone 6 is more expensive, but the difference is not that huge all things considered. As for the release date, the device is expected to be available for purchase in the US on September 19th. The Samsung Galaxy Alpha is now available in the UK, Russia and a handful of other countries, with more to follow in the near future including Canada on September 26th. Unfortunately we don’t know when it will arrive in the US, but rumor has it that we should hear an announcement very soon and a release sometime early next month.

Another important aspect that needs mentioning is the operating system. Both smartphones run on the latest version of their respective OS, but the iPhone 6 runs on the recently released major update, the iOS 8. The Samsung Galaxy Alpha comes equipped with the Android 4.4.4 KitKat and it’s hard to predict when it will upgrade to Android L seeing as how it wasn’t released yet. Samsung generally lags behind when it comes to updates, but recently we saw it step its game up a bit. Still, Samsung will likely focus on updating the Samsung Galaxy S5 and the Samsung Galaxy Note 4 first so the Alpha might not be a top priority for them.

Bottom line? It doesn’t look like Samsung really achieved what it was planning to do with the Samsung Galaxy Alpha. The device seems too expensive for what it offers so you might as well go buy a Samsung Galaxy S5, which is cheaper and comes with better specs and a larger screen. It almost looks like Samsung is charging more just for the metallic frame as there are hardly any other improvements over its current flagship. The iPhone 6 on the other hand is just what you’d expect and it’s also pretty expensive, but Apple did make a lot of improvements over the iPhone 5s so at least it’s trying to offer something better than last year. I am tempted to go with the iPhone 6 for this one as the Samsung Galaxy Alpha seems like a rip-off in many ways. If you’re an iOS user, there are certainly many things to look forward to here because you get the new iOS 8 plus several features and improvements over the previous model. If you’re an Android user, the Samsung Galaxy Alpha doesn’t really bring anything new to the table here so it’s pretty hard to recommend. But as always, this is just a mere comparison and the final decision is up to you.

I’m Load The Game’s co-founder and community manager, and whenever I’m not answering questions on social media platforms, I spend my time digging up the latest news and rumors and writing them up. That’s not to say I’m all work and no fun, not at all. If my spare time allows it, I like to engage in some good old fashioned online carnage. If it’s an MMO with swords and lots of PvP, I’m most likely in it. Oh, and if you’re looking to pick a fight in Tekken or Mortal Kombat, I’ll be more than happy to assist! Connect with me by email markjudge (@) loadthegame.com only
@@MarkJudgeLTG
Previous Assassin’s Creed Unity’s side-missions include sending (innocent) people to jail
Next Moto X (2014) vs Moto X – Ready for an upgrade?