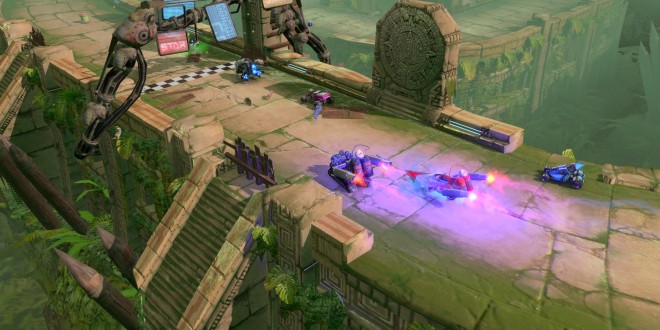 Developer Targem Games has announced its latest explosive top-down racing title BlazeRush is now available for purchasing on the PC and PlayStation 3. PC gamers can snatch it via Steam, while PS3 gamers can access it via the PlayStation Network. It’s worth noting the U.S. version of BlazeRush will be released on November 4th. Both versions will set you back $9.99/€ 9.99. In celebration of the game’s launch, for a limited time only, players can purchase a 4-pack of BlazeRush on Steam for $29.99, which means saving 25%.

To differentiate itself from the rest, BlazeRush throws away the conventional damage-counters and health-bars, instead relying on falling off the death-defying track and plummeting to the landscape far below. Designed with local-play in mind, BlazeRush includes a four-player “couch” mode (meaning everyone plays on the same screen), and up to eight players via online play. Furthermore, with the ‘drop-in’ system, one player can start racing against bots, and then – as other players join – the bots are removed. It’s not just about winning the race; there is also the constant challenge of trying to knock out rivals while keeping your vehicle on the track.

Blaze Rush features sixteen playable vehicles, all of which have notably different handling and racing capabilities, ranging from heavy tracked crawlers to light race cars and hovercrafts. Additionally, players can choose from a vast assortment of weapon power-ups to use against racing opponents, such as pushing, throwing, stunning, or slowing down other vehicles on the track. The game includes three game modes – Race, Survival, and King of the Hill. Given the level of madness and entropy in the game, results of each race are often spontaneous and totally unpredictable. Finally, BlazeRush also introduces a skill-based element to play with its campaign mode, which allows four player co-op in 53 events and challenges, teaching players how to effectively use each power-up.

I’m Load The Game’s co-founder and community manager, and whenever I’m not answering questions on social media platforms, I spend my time digging up the latest news and rumors and writing them up. That’s not to say I’m all work and no fun, not at all. If my spare time allows it, I like to engage in some good old fashioned online carnage. If it’s an MMO with swords and lots of PvP, I’m most likely in it. Oh, and if you’re looking to pick a fight in Tekken or Mortal Kombat, I’ll be more than happy to assist! Connect with me by email markjudge (@) loadthegame.com only
@@MarkJudgeLTG
Previous PlayStation Plus members will receive free access to The Binding of Isaac: Rebirth next month
Next PSA – Lost Sea looks great, coming to PS4/XB1/PC in 2015