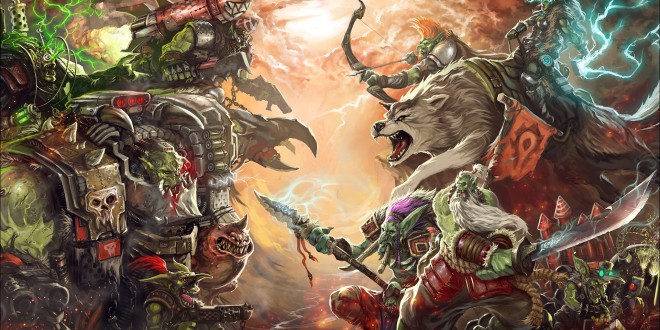 Warhammer 40,000: Eternal Crusade is accepting preorders through Founder Packs. To celebrate the holidays, players can upgrade their packs at a discounted price.

Starting December 17th, players will be able to get a discount on their Founder Packs, which will last until January 7th. The discount for Warhammer 40,000 will be 25% off of a founder pack upgrade. This makes the cheapest upgrade, the Warrior Pack to the Sergeant Pack, $30. The next upgrade after that will also cost $30, with the upgrade following being $60, and the final upgrade being $97.50. Studio Behaviour Online had this to say: “We have some big plans coming in 2015 and want to allow our fans the chance to get some extra upgrades now.” While Warhammer 40,000: Eternal Crusade will be free-to-play, those who choose not to pay will be limited to the Ork Boyz faction.

A part of the Warhammer 40,000 series, Warhammer 40,000: Eternal Crusade is a free-to-play MMO shooter. The game will feature several factions to play as, with each faction having a variety of classes. The factions are: Orks, Space Marines, Eldar, and the Chaos Space Marines. The Tyranids will be featured in the game, but as NPCs. The Tyranids act as a balancing force against the other factions, but will focus on the faction with the most capture land. They will also be the primary enemies in the game’s dungeons, “Under Worlds,” and the survival “Hives” PvE modes. These factions all come from the Warhammer 40,000 universe, with more coming over the game’s lifetime. While free players are limited to the Ork Boyz, those who purchase the game will receive all of these factions. Players will be able to purchase specific factions from the game’s store, as well as faction appropriate cosmetic items.

Warhammer 40,000: Eternal Crusade will release for the PC sometime in 2015. Players can pick up their Founder Packs now as a way of preordering the title.

I’m Load The Game’s co-founder and community manager, and whenever I’m not answering questions on social media platforms, I spend my time digging up the latest news and rumors and writing them up. That’s not to say I’m all work and no fun, not at all. If my spare time allows it, I like to engage in some good old fashioned online carnage. If it’s an MMO with swords and lots of PvP, I’m most likely in it. Oh, and if you’re looking to pick a fight in Tekken or Mortal Kombat, I’ll be more than happy to assist! Connect with me by email markjudge (@) loadthegame.com only
@@MarkJudgeLTG
Previous iPhone 6 vs Motorola Droid Turbo – Iteration vs Innovation
Next Disgaea 5: Alliance of Vengeance Coming to US in Fall 2015