Samsung have been trying to launch a phone running on their in-house Tizen operating system for the longest time now without any real success. The company was forced to delay the device several times in the past due to various issues, but now it looks like we’re finally going to see it early next year. Entitled Samsung Z1, the first ever Tizen smartphone will be a low-end offering that should make its way to the market around January 18th. It’s hard to really trust any potential release dates anymore seeing as how the company keeps delaying this phone, however, a new set of leaked images shows that the Samsung Z1 is definitely ready for launch, so we might actually see it next month after all. 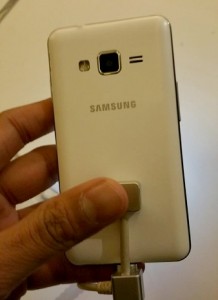 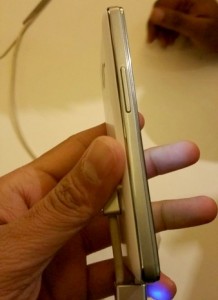 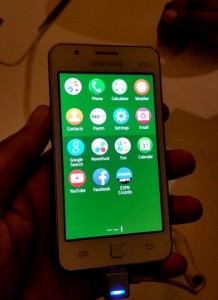 As you can clearly see from the images, the design is not exactly something to write home about and the device is overall a bit small, at least if we were to compare it with most of the popular smartphones around. It looks like the Korean tech giant didn’t really want to take any risks with the Samsung Z1, which is understandable seeing as how this is their very first Tizen handset. As for the specs, we should be looking at a 4-inch display with 800 x 480 resolution, dual-core processor clocked at 1.2 GHz, 768 MB of RAM, 4 GB of storage, 3 MP camera, and a 1,500 mAh battery. As mentioned, the Samsung Z1 is a low-end device and there’s a good reason for that.

Samsung is planning to first launch this new smartphone in developing markets, the first of which will be India. The Tizen-based handset will then also arrive in China at some point before finally reaching South Korea and perhaps other countries as well. The price tag is said to sit at just under the equivalent of $90. Stay tuned for more news and updates.

I’m Load The Game’s co-founder and community manager, and whenever I’m not answering questions on social media platforms, I spend my time digging up the latest news and rumors and writing them up. That’s not to say I’m all work and no fun, not at all. If my spare time allows it, I like to engage in some good old fashioned online carnage. If it’s an MMO with swords and lots of PvP, I’m most likely in it. Oh, and if you’re looking to pick a fight in Tekken or Mortal Kombat, I’ll be more than happy to assist! Connect with me by email markjudge (@) loadthegame.com only
@@MarkJudgeLTG
Previous Nexus 6 now available on the Motorola website in all four variants
Next PS4 vs Xbox One – 2014 console wars are coming to an end

Tizen OS is something many of you haven’t even heard of, yet the Samsung Z1 ...