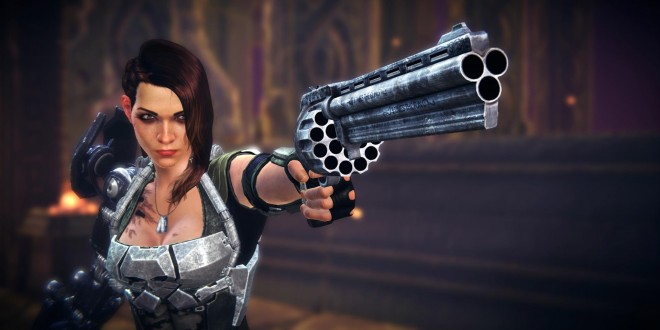 The action RPG Bombshell was first announced to be in development by 3D Realms and Interceptor Entertainment in May of last year.  Today, however, the developers released some specific details about the game alongside a new trailer that shows both some cutscenes and some gameplay. The player assumes the role of Shelley “Bombshell” Harrison, who is a former bomb technician who was discharged from the military after being unable to disarm a bomb made by the Kyrr, some kind of alien race. In the aftermath, Shelley lost her arm and the President went missing.

Just before the game starts, Shelley is approached by a private contractor who offers her a chance to remedy her mistake with a new robot arm made from alien technology. Shelley takes off on a journey to search for the missing president while also trying to save Earth from the still hostile Kyrr and their weird-looking, mad scientist leader Jadus Heskel. Bombshell takes place on a few alien worlds including the dying planet Kyrron, which is in the process of being consumed by a neighboring sun, and the world of Zeroth, a civilization frozen in time.

Bombshell is played from an isometric perspective and combines classic role-playing mechanics such as experience points and side-quests with the techniques of a first-person shooter. The main weapon is Shelley’s mechanized arm which can be modified in several ways to best take on the alien enemies. Bombshell also makes use of finishing moves and interactive environments to add some variety to the combat. Other weaponry can also be used in addition to the arm, including a tri-pistol named Loverboy. Abilities and equipment can be upgrading through use of Shelley’s skill tree.

Bombshell was originally planned for PC and PlayStation 4 only, but the trailer lists “PC and consoles” instead. This could indicate that the game will also be coming to Xbox One. Bombshell is due out at a still unspecified date in 2015. Check out the new video below.

Emma is an aspiring something-or-other with a love for video games fostered since childhood. She is more prone to rage-quits than she would like to admit. In her spare time, she runs her own blog and writes creatively.
@back_Paq_ing
Previous Xiaomi launches new smart home products and action camera at MWC 2015
Next EA Confirms Battlefield Hardline Premium At GDC 2015