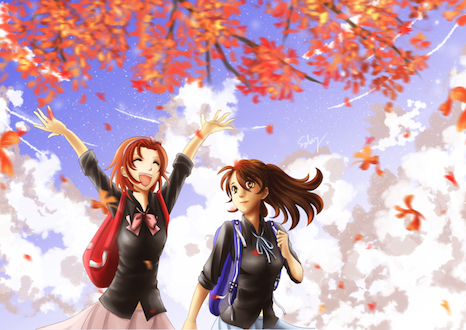 The Vietnamese team behind Meowl Games has announced the start of the Kickstarter campaign for CHANGE! This otome visual novel will allow players to experience the life of Tran Hong Mai, a shy and introverted high-school girl. Mai has a crush, however she finds herself incapable of confessing her feelings for them. Suddenly, her world changes when she swaps bodies with her childhood friend. Nguyen Duc Hiep is Mai’s neighbour and childhood friend. He used to be gentle and kind, as he grew older he became colder and meaner.

These two characters don’t have to deal with these extreme circumstances alone. Vu Ngoc Anh is the daughter of the owner of a large corporation. This energetic “princess” is sweet in every way, including her nickname “Na.” Her cousin Vu Viet An is calm, composed and quiet. Mai’s predicament will allow her even greater access to her crush Le Anh Tuan away from his adoring fans. He is the image of the ideal boyfriend, however there is a darker side to him.

Meowl Games is staffed by a passionate team of Vietnamese youngsters that are bucking the trend. It is common in many Asian countries for parents to push their children to perform better and follow a set path. As a result, countries in the region have reported improved educational indicators. This does have some negative consequences that the artists at Meowl Games know very well. It can be difficult to follow a different path in this environment, however they have decided to make a different choice – developing otome games. These games focus on the romantic relationships between the customizable female protagonist and several male or female characters. Otome games have been released predominantly for the Japanese market, however some titles make their way to the West.

Players will be able to discover the secrets behind this “body swapping” incident and reveal shocking secrets in CHANGE! This game will allow users to interact with these four characters across branching paths that will lead to 12 possible endings. Kickstarter backers from the $9 tier will receive a copy of the game upon completion. CHANGE! is expected to become available in September 2015 for the PC, Mac and Linux platforms.

I'm a gamer and a massive fan of anime. I'm a massive simulator geek. Who isn't? Simulators offer me the opportunity to experience something I wouldn't otherwise. Have you ever driven a train? I haven't, and I probably never will. However Train Simulator 2015 gives me the opportunity to experience what it might be like. I'm also a big train and space exploration geek.
@ivanmashkov
Previous Capcom Releases First Dragon’s Dogma Online Gameplay Footage
Next Steam Greenlight Spotlight: APT

Work with Windows 8.1 and enjoy it