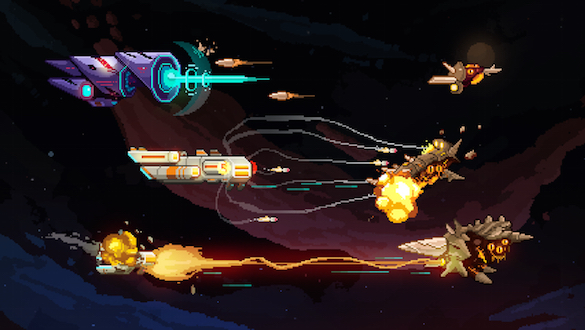 The Kickstarter campaign for the latest game by the creative geniuses at Massive Damage has reached and exceeded its funding goals. As of this writing, the campaign has reached $83,000 out of the original $40,000 goal. Halcyon 6: Starbase Commander has been approved by the Square Enix Collective. This allows the game’s developers to receive some marketing backing from one of the best-known video game publishers on the market.

“Massive Damage are a smart and ambitious team with a proven track record not only in developing and delivering games, but in engaging with their community. With an engaging visual style and deep and rewarding gameplay, Halcyon 6 looks like it has all the ingredients to make a splash once released.” – an excerpt from the campaign’s page on Kickstarter

Halcyon 6: Starbase Commander will challenge players to harness the power of an ancient space station to turn the tides of a disastrous war. This space station is humanity’s only hope to fight off humanity’s enemies. This space station will be able to build the fleets to defend your species. This rogue-like sci-fi strategy survival game will feature a dangerous and uncaring universe to explore, a crew with unique characters to manage, hard decisions to make, tough battles to fight, a starbase to build up and an incredible emergent story. Starbase Commander will feature a unique cast of officers with their own abilities and character traits. Players will have to manage these characters and use their traits and abilities in the best possible way. This doesn’t mean that players won’t have any choice in the matter. At the start of each playthrough in this randomly generated title players will have to choose the officers for Halcyon 6. That choice will have lasting consequences. Backers from the $15 tier will receive a copy of the game. Halcyon 6: Starbase Commander is expected to be released in December 2015.

The team at Massive Damage is using the Square Enix Collective that allows indie developers to get a “boost in marketing” without any additional financial support. Collective is a platform that allows indie developers to receive support in funding their title and publishing. Developers whose games have become approved on the platform will get a marketing boost from the Collective as a “Square Enix Approved” title. This will help build awareness of the game and increase the amount of funds that will be raised through crowdfunding platforms. This allows developers to receive some significant benefits while retaining the rights to their games.

I'm a gamer and a massive fan of anime. I'm a massive simulator geek. Who isn't? Simulators offer me the opportunity to experience something I wouldn't otherwise. Have you ever driven a train? I haven't, and I probably never will. However Train Simulator 2015 gives me the opportunity to experience what it might be like. I'm also a big train and space exploration geek.
@ivanmashkov
Previous Square Enix Teases Surprise JRPG for Consoles
Next Steam Greenlight Spotlight: PolyRace