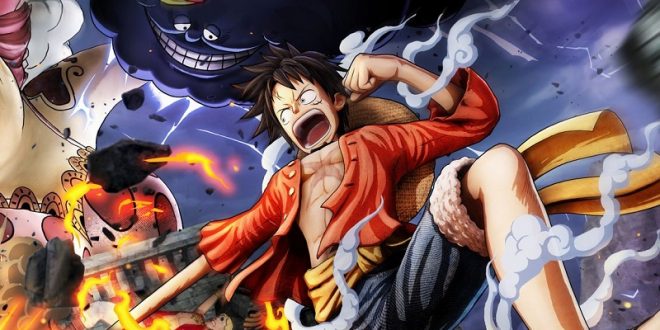 The ESRB ended up giving the game a T (for Teen) rating, with the content descriptors being Language, Suggestive Themes, Use of Alcohol and Tobacco, and Violence. As always, they also provided a more in-depth rating summary for everyone to check out, which is the following:

“This is an action game, based on characters from the One Piece universe, in which players clear routes, defeat chiefs, and accomplish combat objectives to become King of the Pirates. Players fight their way through hordes of enemies, using punches, kicks, aerial attacks, and cartoony weapons (e.g., oversized swords, mini-tanks). Some characters use various artillery (e.g., cannons, bombs, rapid-fire bullets) to defeat enemies. The frenetic melee-style combat is highlighted by cries of pain, impact sounds, and explosions. Cutscenes sometimes depict characters getting dramatically slashed or impaled. Some female characters wear low-cut outfits that reveal large amounts of their breasts/cleavage. The dialogue also includes suggestive material (e.g., “Now that I’ve won…Maybe you’d be so kind as to show me your panties”; “I can’t believe I have to work together with a pervert like you…”). A handful of characters are seen smoking cigars, and one scene depicts characters drinking sake. The word “sh*t” appears in dialogue.”

One Piece: Pirate Warriors 4 is being developed by Omega Force and published by Bandai Namco Entertainment for PS4, Xbox One, Nintendo Switch and PC. It will release in Japan on March 26th, 2020, with the worldwide release happening on March 27th.