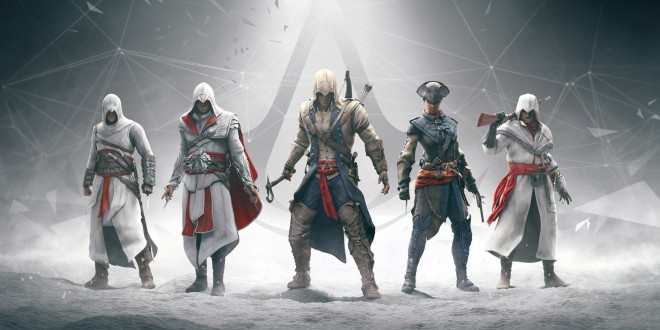 Share
Assassin’s Creed games have had their ups and downs, that’s for sure, but the storyline of the popular Ubisoft franchise has always been somewhat captivating. Last year, Ashraf Ismail, the direcotr of Assassin’s Creed IV: Black Flag specifically mentioned that there’s an overall story arc and that each iteration of the game is unique, they are all somewhat connected to this arc. In other words, the developers had an overall story planned for Desmond and the order of Assassins. Turns out, this isn’t exactly true. Darby McDevitt, the lead writer behind Assassin’s Creed: Revelations and Assassin’s Creed IV: Black Flag has a different take on things. According to McDevitt, the game developers have the entire human history at hand, and thus, they can play with history as much as they like. Because of this, there’s no actual ending planned for the story, and even future Assassin’s Creed titles set in Japan are a possibility. Of course, this basically means what we’ve all been thinking for awhile now, mainly that Ubisoft has no intention of stopping the milking process of their main cash cow. Let’s face it, there’s no Ubisoft franchise that brings in as much money as the Assassin’s Creed franchise. And while a never-ending story seems like a turn-off, I’d still take it over more obvious money-grabs like Assassin’s Creed: Liberation HD.

“The problem with the Desmond trilogy was that back in 2007 they set a date with Abstergo launching a satellite that was going to control people’s minds. That unfortunately took a back seat in ACII when they swapped the plot point for the end of the world, which was conveniently going to happen in the same month in 2012. This was a hard date we were going to hit–we realised very quickly that Assassin’s Creed is a popular franchise and we’d like to keep it going.” detailed McDevitt. As for the possible locations of future franchises, McDevitt stated that speculation is mostly fan-based, and nothing has been officially decided by Ubisoft. Fans believe that Shogun-era Japan, Victorian London, The Wild West or a French-Revolution Paris are possible future settings, and while McDevitt hasn’t confirmed these possibilities, he stated that “I will say that fans definitely think alike. We have the same goals for the series, let’s say. I’ll leave it at that. We always want to surprise.”

What would you like to explore in future Assassin’s Creed titles?

Old-school gamer with a cheeky tongue that gets me in trouble. When I'm not playing games, I'm writing about them, preferably in the vicinity of a fridge! Oh, and if you're a Justin Bieber fan, I'm afraid we can't be friends!
Previous Elder Scrolls Online – Arrival trailer revealed
Next EA wants to avoid future release failures after Battlefield 4