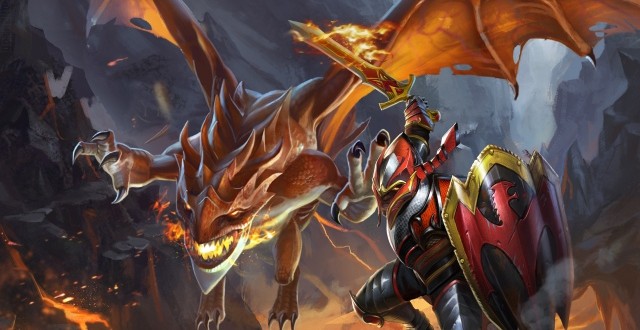 A few days ago Valve released the latest Dota 2 patch, which comes with the usual assortment of bugfixes and hero tweaks. The patch goes by the name of 6.81b and also adds some new Compendium rewards. A quick look at the official patch notes reveals that Daily Hero Challenge, Alternate Voice Vote, and Model Update Vote are now available to all Dota 2 Compendium owners.

The first reward grants you 25 Compendium points every day for winning a game with a certain hero. The catch here is that you’re not going to choose the hero yourself, Valve will do it for you. The Alternate Voice Vote allows you to vote for a hero that you would like to receive a brand new voice and dialog pack. Meanwhile, the Model Update Vote is similar to the voice reward except that you’ll be voting for a new hero design this time around. Dota 2 patch 6.81b also comes with additions for two previously released Immortal items. Dragon Knight’s Kindred of the Iron Dragon and Death Prophet’s Fluttering Mortis both feature sound effects now. The only Compendium-related fix that came with the update is aimed at Warlock’s Hellborn Grasp. The bug where the hero’s Upheaval ability was not showing visual effects properly while the Immortal staff was equipped has been fixed.

As with every new patch, 6.81b also brings some balance changes and hero tweaks to Dota 2. The list is fairly long so I’ll just give you some of the highlights. The first thing that caught my attention was the damage rescaling on Juggernaut’s Omnislash. His ultimate now deals 200-225 damage per jump, where before it dealt 175-250. These new values should help you calculate more precisely the total damage you will end up doing. An arguably major change affects Mirana’s Sacred Arrow, which now only has a minimum stun duration of 0.1 seconds. The maximum duration hasn’t changed. Some other tweaks include improved turn rate for Earthshaker, Lina’s Light Strike Array stun duration increased, and Tusk’s Walrus Punch cooldown reduced. Also, Invoker’s Cold Snap damage has been reworked from the initial and secondary proc damage of 60/30 to 7xQuasLevel per proc.

In related news, the prize pool for The International 4, the biggest Dota 2 event of the year is now almost $9 million. Only three more rewards remain to be unlocked in the Compendium. We assume that Valve will add a few more stretch goals soon enough. Dota 2 already features a prize pool three times bigger than last year’s The International. TI4 will take place during July 18-21 so there’s still plenty of time for it to get even more crazy. Stay tuned for more news and updates.

I’m Load The Game’s co-founder and community manager, and whenever I’m not answering questions on social media platforms, I spend my time digging up the latest news and rumors and writing them up. That’s not to say I’m all work and no fun, not at all. If my spare time allows it, I like to engage in some good old fashioned online carnage. If it’s an MMO with swords and lots of PvP, I’m most likely in it. Oh, and if you’re looking to pick a fight in Tekken or Mortal Kombat, I’ll be more than happy to assist! Connect with me by email markjudge (@) loadthegame.com only
@@MarkJudgeLTG
Previous 46 New apps for Xbox One – HBO go and Twitter included!
Next Star Citizen introduces the Freelancer line-up