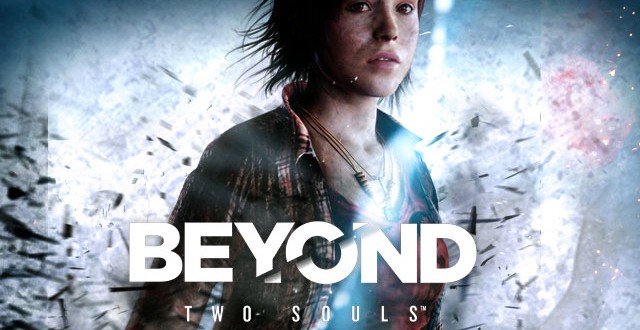 Beyond Two Souls could be coming to the PS4 this year

Although not officially announced by Sony, listings for a PS4 version of Beyond Two Souls have recently popped up on a couple of German retailer websites. According to the listing below, Quantic Dream’s highly acclaimed title will be released for the PS4 this September for the equivalent of about $60. The other listing is very similar to this one except that it doesn’t feature a description for the game and only says that Beyond Two Souls will be released in 2014, but doesn’t specify September or any other month. Neither Sony nor Quantic Dreams mentioned anything about this so it would be wise to take it with a grain of salt for the time being. You can find more info about the game below the listing. 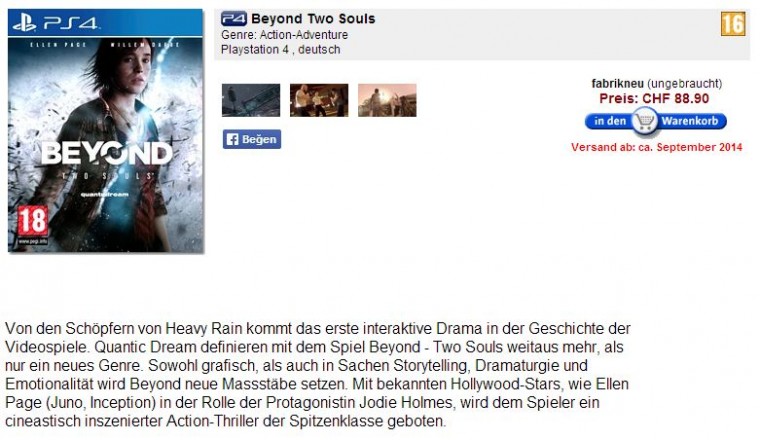 “Beyond Two Souls will feature Oscar nominee Ellen Page in the lead role of Jodie Holmes, a young woman who possesses supernatural powers through her link to an invisible entity. Ellen is supported by Willem Dafoe who plays Nathan Dawkins, an enigmatic scientist working for a government division studying paranormal activities. Dawkins’ professional curiosity in Jodie, driven by personal tragedy, is a central theme in Beyond Two Souls, and provides a rich and evocative narrative that only Dafoe’s subtleties of performance could fully realise. In Beyond Two Souls, gamers will play through fifteen years of Jodie’s story, experiencing the most striking moments of her life. As she traverses the globe, Jodie will face incredible challenges set against a backdrop of emotionally charged events, the likes of which have never before been seen in a video game. Like its predecessor Heavy Rain, Beyond Two Souls will allow players to shape the course of the story through their decisions and actions taken in the game.”

Beyond Two Souls was released back in October 2013 for the PS3 and became popular mostly because Ellen Page and William Dafoe voiced the characters of Jodie Holmes and Nathan Dawkins. The game has other strengths as well, but in the end it was mostly criticized because of its lack of plot focus and character interaction. If a PS4 version is really underway we assume it will be a Remastered version similar to that of The Last of Us. 1080p resolution and 60 frames per second is usually the norm these days, but we’ll have to wait and see.

As far as we can tell these listings haven’t appeared on any other retailer website, which makes the whole thing seem rather suspicious. We’ll keep you update with any further developments so stay tuned.

I’m Load The Game’s co-founder and community manager, and whenever I’m not answering questions on social media platforms, I spend my time digging up the latest news and rumors and writing them up. That’s not to say I’m all work and no fun, not at all. If my spare time allows it, I like to engage in some good old fashioned online carnage. If it’s an MMO with swords and lots of PvP, I’m most likely in it. Oh, and if you’re looking to pick a fight in Tekken or Mortal Kombat, I’ll be more than happy to assist! Connect with me by email markjudge (@) loadthegame.com only
@@MarkJudgeLTG
Previous Android L now available for the Nexus 4 in addition to Nexus 5 and Nexus 7
Next LG G3 and the G Watch both coming to AT&T July 11th