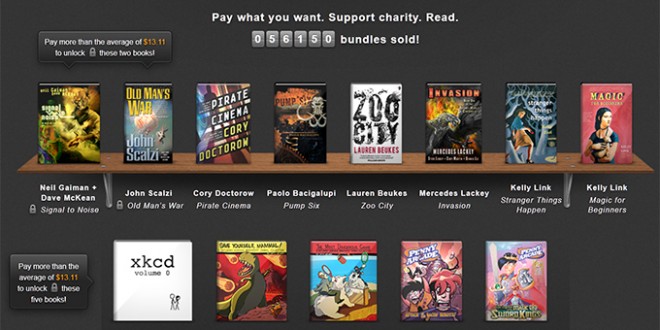 Humble Bundle has added two new bundles to their store. The first it the Humble 2K Bundle that went live earlier in the week. Available at any price (though a $1 minimum charge for Steam keys is in effect) are BioShock, The Bureau: XCOM Declassified and The Darkness II. All three games are first-person shooters, though they vary in style and gameplay mechanics, with BioShock allowing the use of the magic-like plasmids for example. Beating the average price of $7.89 will also land you BioShock 2, Mafia II and Spec Ops: The Line.

Paying more than $20 will also unlock an additional two games. XCOM: Enemy Unknown and BioShock Infinite are the two newest titles in the bundle, with the latter only releasing in 2013 to wide critical acclaim. As is usual in Humble Bundles, you can choose to split your payment between the developer, the site and specially chosen charities. This bundle contributes to both the American Red Cross and Actions Against Hunger. Currently the bundle has sold over 270,000 copies, totaling over $2 million in payments. The page also reveals that more games will be added soon. Traditionally the extra games arrive in the second week of the deal.

The second available deal is the Gamepedia Humble Weekly Bundle. Running through to July 17 it features an array of games and is sponsored by Curse. Games included in the pay what you want category include Stacking, Tower of Elements, Windforge, ReignMaker, Paranautical Acitivty and Strife. Paying more than $6 will also grant access to Curse Premium, Darkout and Signs of Life, while paying $10 will give you Edge of Space and Lifeless Planet. You can also pay $36 to gt a special T-shirt, vinyl stickers and a wristband from Curse. Buying the bundle will also support the First Book and Indie Cade Foundation charities.

Freelance writer with a love for gaming. Have owned pretty much every console and handheld from the last 15 years. When I'm not writing about games, which I am most of the time, I tend to be reading, writing about sport, binge watching shows on Netflix...or playing the odd video game.
@nathanpgibson
Previous GameStop willing to pay developers to create exclusive content
Next Ubisoft keeping control of movie adaptation to ensure quality