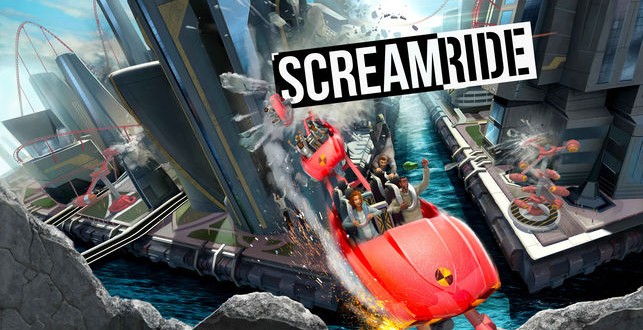 Microsoft has revealed more information on “Scream Ride”, an Xbox exclusive game made by Frontier Developments. After the brief trailer shown at Gamescom, the publisher issued a press release in which they give more information regarding the game’s track-sharing capabilities and its three gameplay modes.

The game puts the player in charge of creating a theme park that is being tested by visitors. The trailer shows amazing rides that launch pods with people into buildings just like wrecking balls and it shows great use of physics and explosions.

According to Microsoft, Scream Ride combines three gameplay elements: creation, action and destruction. Players will be able to create park theme rides however their imagination dictates, test their creation by putting their own character in the rides and, last but not least, destroy the rides in creative and spectacular ways.

Frontier Developments provide players with a Level Making tool so they can create their own world. There are three playable roles featured in the game: Engineer, Scream Rider and Demolition Expert. The Engineer creates the coasters and rides from the props offered by the developer. Scream Riders are testing the track. A succesful track is measured through how much the occupants scream. This game mode involves piloting the rides through the tracks. Players can share these tracks on Xbox Live. The Demolition Expert has to find innovative ways to destroy every theme park in creation. The trailer shows us amazing physics effects and explosions, so this mode seems life fun.

Overall, the game seems like a fun experience, and the combination of creating, testing and destroying might prove to be a genius move from Microsoft. The game will be released in Spring 2015 for Xbox One and Xbox 360. The next gen version will cost $39.99 and the other one $29.99.

I'm a journalism graduate and an occasional gamer. As a kid I used to own a NES clone called "Terminator 2", which was hugely popular in my country. I like old school games and adventure games but I occasionaly play RPG's and Shooters as well, though I wouldn't call myself an expert at these kinds of games. When I'm not writing or playing games I prefer reading detective or fantasy novels.
Previous Activision will not release Call of Duty: Advanced Warfare on the Wii U
Next The Xbox 360 version of Ascend: Hand of Kul was discontinued