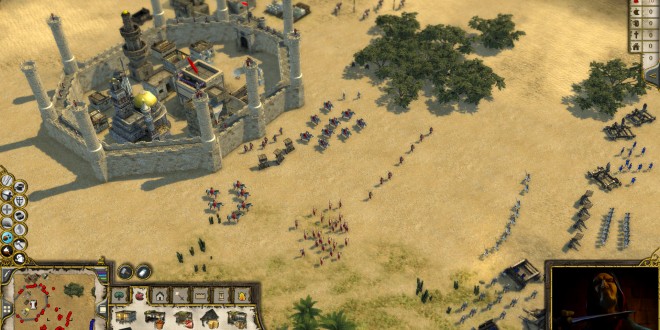 After a few delays, Stronghold Crusader 2 – the latest entry in the long-running castle simulator – was supposed to be released a few days ago. Sadly, back in late August, its independent developer – Firefly Studios – had announced that the game’s newest launch date is September 23rd. To somehow alleviate said situation for die-hard fans such as myself, Firefly has released a new developer diary video, in which the marketing manager talks about the franchise’s first female opponent – the Sultana. What’s important to note is that the Sultana isn’t an especially difficult opponent (if you think about it, neither is her male counterpart – the Sultan), but she does prefers “deception and intelligent use of the land over brute force,” according to the Firefly team.

“The key to defeating the Sultana lies in the game’s new unit balancing,” adds the developer. “Gone are the days where players could dominate every skirmish match by spamming Horse Archers or mobbing the opposing player with Assassins. The Sultana prefers specialised units, which must be used against her to win. Counter Horse Archers with charging Sassanid Knights, Sassanid Knights with Pikemen in a ‘dug-in’ defensive stance, Pikemen with fire from Oil Pot Throwers and so forth, depending on which units she opts for in a given match. Every unit has a counter, with the Sultana designed to train players in the art of unit selection. Defeat her and learn one of the most important lessons in Stronghold.”

Back in 2001, Firefly Studios had released the first Stronghold game. The castle simulator was more popular in Europe than anywhere else, but nevertheless, it spawned four more sequels: Stronghold Crusader (which is more of a spin-off), Stronghold 2 (which is – frankly – a disappointment), Stronghold Legends (the developer tried something new here, and while it’s an appreciated effort, the game is not much better than #2), and Stronghold 3 (this one had an atrocious launch littered with bugs, but after some patching, it’s a decent effort; still not better than the original).

Stronghold Crusader 2 is – obviously – the fifth sequel, launching exclusively on the PC.

I’m Load The Game’s co-founder and community manager, and whenever I’m not answering questions on social media platforms, I spend my time digging up the latest news and rumors and writing them up. That’s not to say I’m all work and no fun, not at all. If my spare time allows it, I like to engage in some good old fashioned online carnage. If it’s an MMO with swords and lots of PvP, I’m most likely in it. Oh, and if you’re looking to pick a fight in Tekken or Mortal Kombat, I’ll be more than happy to assist! Connect with me by email markjudge (@) loadthegame.com only
@@MarkJudgeLTG
Previous Intel reveals MICA, a luxury smart bracelet
Next Minecraft on PS4 was released today