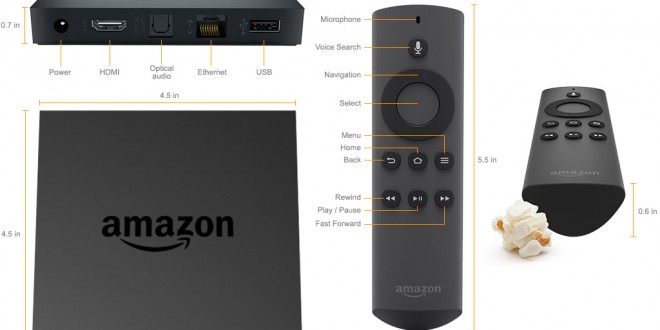 Amazon’s Fire TV box has launched earlier this year in America and it is set to launch on October 23 in the UK and Germany, according to Amazon’s Vice President of Product Marketing Peter Larson’s announcement at IFA 2014. Pre-orders are now available and the TV streaming box is up for grabs at £79. Amazon Prime subscribers have a limited-time opportunity to pre-order Amazon Fire TV for a considerably reduced price of £49.

Amazon Fire TV is a multimedia device that comes equipped with a quad-core processor, 2 GB of memory, dedicated graphics card and support for up to 1080p HD video and Dolby Digital Plus surround sound. Amazon’s innovative take on streaming boxes is its voice search option that comes incorporated in the set’s remote control. According to Larson’s statement, over 92% of current searches on Fire TV are done through the voice-search system. Amazon’s boasting a massive selection of services available for the UK, including Netflix, Youtube, Sky News, Vimeo, Spotify, Bloomberg and many more, including Amazon Instant Video and Amazon Prime Instant video. Unfortunately, there is no sign of BBC, ITV, 4OD or Now TV on the list of services, which might turn away UK costumers.

Amazon Fire TV is also a gaming device. Games available to play for the tiny box include certain Android games such as Minecraft: Pocket Edition, Asphalt 8 and Deus Ex: The Fall. It also features an Amazon exclusive game: a third-person sci-fi shooter called Sev Zero, made by Amazon Game Studios. They have also resurrected Flappy Birds only for Amazon Fire TV as Flappy Birds Family, with a new multiplayer version of the game. In order to play games you will have to buy the optional gaming controller for £34.99.

If you are not an Amazon Prime subscriber by the time you buy your Fire TV, you will also receive a free 30-day Prime trial. For more information on the tiny box and pre-orders, head over to amazon.co.uk.

Alessandro is a languages and literature student and gaming enthusiast. Long hair and a bushy beard, he spends most of his time on romantic dates with fascinating old tomes. In his free time, he follows and comments the gaming community while playing games. You can follow him on twitter to see what he's up to.
Previous Fable Anniversary on the PC gets an official release date and new trailer
Next Dead Rising 3 Apocalypse Edition now available on PC