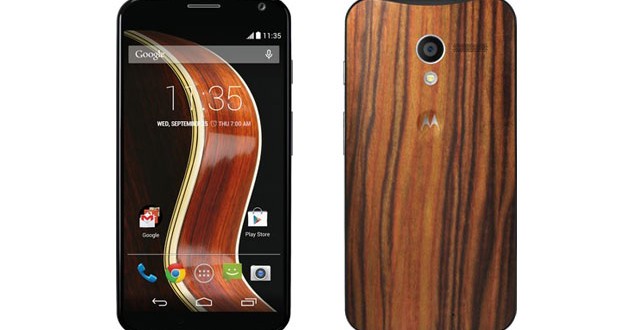 Motorola announced the updated Moto X and Moto G models last week during the IFA Trade Show. While the Moto G (2014) is already priced and available for purchase, the Moto X (2014) will only start shipping later this month or early October depending on your region. However, you can already pre-order the smartphone now from a number of retailers if you want to make sure that you’ll get it as soon as it launches. UK-based Phones4u is one such retailer and it offers the Moto X (2014) starting at £34.50 with a two-year contract in black or bamboo cover options.

Other retailers are also offering the Black Leather option while Amazon UK offers a dual-SIM option for only £160. The giant retailer says that the second-generation Moto X will be released on September 15th in the UK. As with many previous Motorola devices, the Moto X can also be customized in various ways once the UK version of the Motomaker becomes available later this month. Prices will vary, but a new contract free smartphone from Motorola’s website will cost you £420 for the plastic 16GB model or £460 for the 32GB one. Leather and wood options will add a bit to that price, with a 16GB Moto X (2014) costing £440 and a 32GB model no less than £480. As for the US pricing, the device is expected to cost $399 unlocked or $99 on a two-year contract with Version or AT&T.

The second generation Moto X is an improvement in almost every way over its predecessor while still having a reasonable price. Motorola’s latest flagship smartphone comes equipped with a 5.2-inch AMOLED display with 1080p resolution, 423 PPI and Corning Gorilla Glass 3 protection. Hardware-wise, we’re looking at a Qualcomm Snapdragon 801 quad-core CPU running at 2.5 GHz with Adreno 330 GPU and 2 GB of RAM. The Moto X (2014) also features a 13MP primary camera with dual-LED, 2,300 mAh battery and comes in 16GB or 32GB storage options with no microSD support. The device runs on the Android 4.4.4 KitKat operating system, but is expected to upgrade on Android L in due time after Google launches the final build.

Aside from the updated Moto X and Moto G smartphones, Motorola also finally launched the Moto 360 circular smartwatch at the IFA Trade Show. Interestingly enough, the gadget sold like hotcakes and quickly went “out of stock” on both Motorola’s website and the Google Play Store. The Moto 360 is scheduled to arrive in the UK in late October for the price of £200.

I’m Load The Game’s co-founder and community manager, and whenever I’m not answering questions on social media platforms, I spend my time digging up the latest news and rumors and writing them up. That’s not to say I’m all work and no fun, not at all. If my spare time allows it, I like to engage in some good old fashioned online carnage. If it’s an MMO with swords and lots of PvP, I’m most likely in it. Oh, and if you’re looking to pick a fight in Tekken or Mortal Kombat, I’ll be more than happy to assist! Connect with me by email markjudge (@) loadthegame.com only
@@MarkJudgeLTG
Previous Sony reveales its Tokyo Game Show 2014 lineup, Bloodborne, The Order: 1886, Resident Evil: Revelations 2 playable
Next Smart helmet comes with augmented reality features