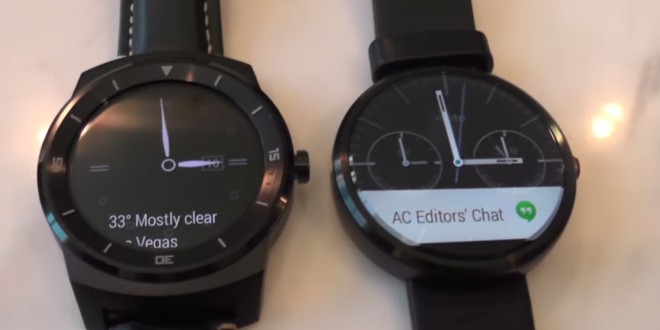 The Moto 360 stocks have just been refreshed in retail stores and the LG G Watch R release date for several countries has just been announced, so the time has come to see which of these two round smartwatches gets ahead of the other. Wearables have become all the rage in the past year, with various companies releasing and announcing smartwatches, fitness trackers, smart glasses, helmets and virtual reality headsets. The Asus ZenWatch is hype nowadays, with a November release date approaching, as well as the Apple Watch which will probably be launched early next year. There have been some issues reported with the Apple Watch, one of them being that the sapphire screen provider has filed for bankruptcy, so we’re not sure what will become of the Apple Watch. 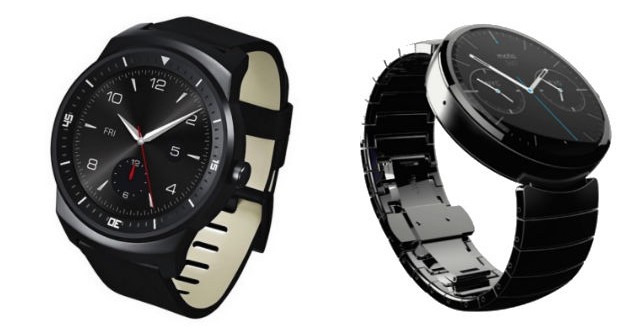 Other companies like Samsung and Pebble have already released their fair share of smartwatches, and there’s a Sony, Kyocera, HTC and a Microsoft smartwatch coming up, although these are just rumors right now. Nonetheless, the Moto 360 and LG G Watch R are the most popular smartwatches, especially in the U.S. and we have to admit that their popularity was brought on by their round designs. People started raving about the round watch faces on the Moto 360 and LG G Watch R even before their official announcement, even though Martian had already put out a round smartwatch.

Android Wear contributed a great deal to the popularity of the Moto 360 and LG G Watch R and Google has announced that the wearable OS will continue growing and improving, with an OCtober 15 Android Wear 2.0 update coming up. Android Wear isn’t the only operating system for wearables out there, Samsung’s Tizen being one of its main competitors, and the OS on the Apple Watch will also be interesting to see. Android Wear does bring a whole bunch of features and functions to the Moto 360 and the LG G Watch R, and we should expect Android Wear 2.0 to be even better on these watches because it will be optimized for round displays.

Let’s get to it, though, shall we? The Moto 360 round smartwatch has two significant shortcomings, so let’s get them out of the way. One of those shortcomings is that the Moto 360 doesn’t exactly have round watch face, because there’s a black bar on the bottom which houses hardware. That little flaw ended up being actually ignored by most Moto 360 owners who say that after a day or two of use, they don’t even notice the black bar anymore. The other shortcoming is battery life, which on the Moto 360 used to last just around 12 hours with Ambient Light turned on. A new Moto 360 firmware update fixed that issue, though, so the Moto 360 can now hold out for almost two days, without Ambient Light.

The Moto 360 body is made of stainless steel and you can get either leather or steel bands to go with it, as well as pair any 22 mm watchstrap of your choice. It’s also dust and water resistant, so you won’t have to worry about forgetting to take the Moto 360 off your wrist before jumping into the shower. It measures 11.9 mm in thickness, so it’s not the thinnest wristwatch you can find out there, but it doesn’t seem bothersome. It’s also a pretty big smarwatch overall, which makes it definitely obtrusive on smaller wrists. Nonetheless, it shouldn’t have to bother most of the men out there, who tend to have larger wrists than women. As for women, you can make a fashion statement out of it, if that’s your concern. Otherwise, you can easily get used to the Moto 360 in a couple of days. 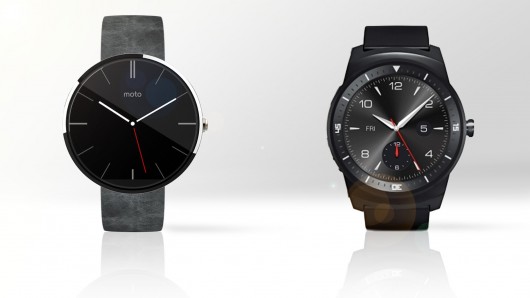 The Moto 360 has been on sale for almost a month now, and you can buy it for $250, which is not a steep price at all, considering that the LG G Watch R price is rumored to be $328, almost as much as the Apple Watch. The LG G Watch R release date is set for October 14th in South Korea and we expect the timepiece to arrive on U.S. and European markets later this month. Since both these watches run Android Wear and will be updated to Android Wear 2.0 on October 15 (presumably), OS should not be a determining factor in this comparison. Although we are curious to see how Android Wear 2.0 will be optimized for round watch faces, we haven’t had much to complain about so far, either.

The LG G Watch R sports a 1.3 inch P-OLED round display with a 320-320 resolution with 348 ppi pixel density. The LG G Watch R specs include a Snapdragon 400 CPU backed by 512 MB RAM and 4 GB internal storage. Bluetooth 4.0 and a 410 mAH battery are also featured on the LG G Watch R. The Moto 360, on the other hand, has a 1.56 inch display with a 320*290 resolution and 205 ppi pixel density, which is larger, but less saturated than that of the LG G Watch R. When it comes to sunlight readability, both device perform well and you can hardly tell that LG packed more pixels into the G Watch R. The Moto 360 runs on a Texas Instrument OMAP 3 CPU backed by 512 MP BAM and 4 GB internal storage. The Moto 360 has a 320 mAH battery which can be wirelessly charged in a stylish dock that’s included in the package. The Moto 360 features Bluetooth 4.0 and a heart rate monitor on the back, as well.

Both the Moto 360 and LG G Watch R are stepping stones in the Android Wear smartwatch market, thanks to their design and features, as well as popularity. While the Moto 360 offers a larger screen, wireless charging, a lower price and a heart rate sensor, the LG G Watch R offers a completely round watch face, classy design and an always on display. Both timepieces have correposnind 9 axis sensors, so you will be able to use either for when you’re working out. It all comes down to price and design in my mind, and I would honestly turn down both of these watches. Not because they’re too expensive, but because they’re pretty big for my wrists and would look weird, to say the least. Which would you choose? 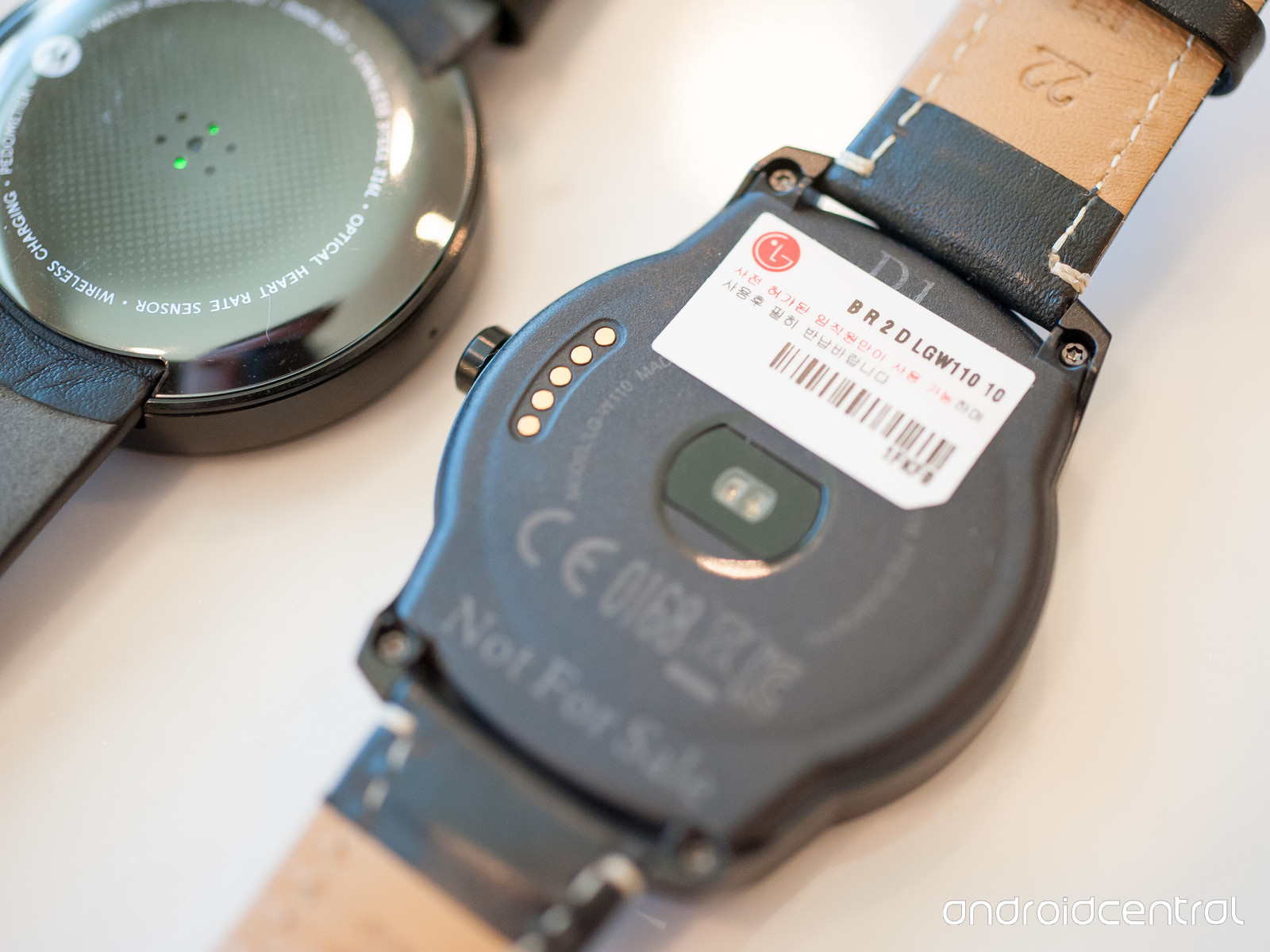 My life-long dream has been to test out every gadget on the market! Considering the fact that I've rapidly destroyed almost every gadget I've had so far, I'm not inclined to owning something, so my ideal outcome would be to have a different gadget each month. I'm really into smartphones, wearables and tablets and I love Playstation and Xbox, I'm sure I'll beat you at your own game (after a month of training... or two)
Previous GTA 5 PS4 weights no less than 50 GB, supports motion control features
Next 4 things iOS 8 still can’t do