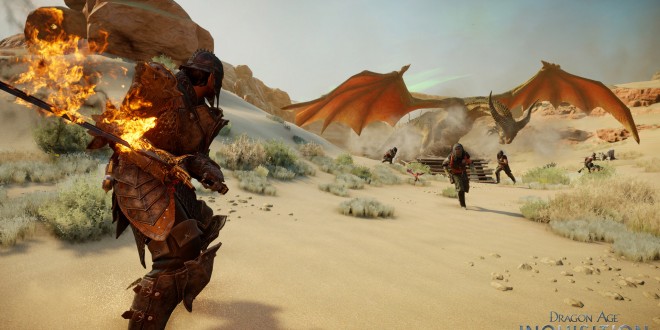 Developer BioWare has announced via its latest blog-post Dragon Age Inquisition has officially gone gold on all platforms. BioWare had started working on Dragon Age Inquisition about four years ago, even before shipping the second installment in the series. This latest entry in the franchise is built on a brand-new engine – Frostbite 3 – and features a re-imagined combat, which seems to be a combination between the tactical approach of the first game and the more fast-paced one of Dragon Age II. Additionally, in contrast to the second game, Dragon Age Inquisition brings back playable races, while also adding brand-new ones like the Qunari.

“I’m excited to announce that Dragon Age Inquisition has gone gold on all platforms! This milestone is a testament to the hard work of the developers (and their families!) who put so much into this game, and took on every challenge that was put before them,” writes Executive Producer Mark Darrah. “That we’ve made it this far is also an acknowledgment of tremendous support and patience from our fans: you’ve been an inspiration to us since the beginning. The biggest story of the year is yours to play, very, very soon.”

Dragon Age Inquisition is an upcoming action role-playing game developed by BioWare and published by Electronic Arts. The game will feature larger environments with much more opportunity for exploration. Combat is expected to differ somewhat from its direct predecessor, and focus more on a player’s ability to prepare, position, and form a cohesive team with his or her party members, requiring fewer repetitive finger strikes but better thinking like the first installment. Tactical view also returns for all five platforms in Dragon Age Inquisition, whereas before it was exclusive to PC in Dragon Age: Origins, and totally removed in Dragon Age II.

I’m Load The Game’s co-founder and community manager, and whenever I’m not answering questions on social media platforms, I spend my time digging up the latest news and rumors and writing them up. That’s not to say I’m all work and no fun, not at all. If my spare time allows it, I like to engage in some good old fashioned online carnage. If it’s an MMO with swords and lots of PvP, I’m most likely in it. Oh, and if you’re looking to pick a fight in Tekken or Mortal Kombat, I’ll be more than happy to assist! Connect with me by email markjudge (@) loadthegame.com only
@@MarkJudgeLTG
Previous Smaller, more efficient 20nm chip to be fitted on the Xbox One Slim
Next Borderlands The Pre-Sequel’s first DLC adds new character