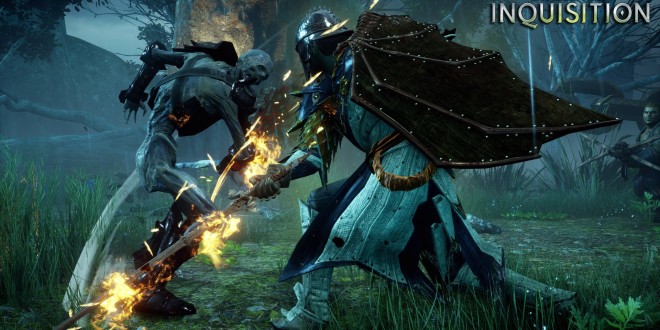 During a recent interview with GamesIndustry International, Dragon Age Inquisition Executive Producer Mark Darrah has revealed developer BioWare’s latest role-playing title had originally started as a multiplayer-only entry in the Dragon Age franchise. “Weirdly, we actually had a project code-named Blackfoot which was the first game we had that was looking at Frostbite,” said Darrah. “It was a Dragon Age game, multiplayer only, that was in development before Dragon Age II came out. That became the core of what became Dragon Age Inquisition, the tech-lines, more than any of the development, so we’ve actually been looking at [multiplayer] a long time.”

Additionally, the Executive Producer has spoken about the impact the massive success of Bethesda’s Elder Scrolls V: Skyrim had on the RPG genre overall. “Skyrim changed the landscape for role-playing games completely,” he said. “Now the expectations of your other fans, they’re changing too. People age, they typically have less time for games, so it changes their expectations in terms of gameplay segments. It also results in some nostalgia. So they may become even more firm in their attachment to previous features. Now suddenly you have 15 million people that have basically had the first RPG they’ve ever played as Skyrim. They have totally different expectations of what storytelling is, what exploration is, and I think exploration is really where we’ve seen the biggest change.”

Dragon Age Inquisition is an upcoming action role-playing game developed by BioWare and published by Electronic Arts. The developer is planning on fusing elements of both earlier games in the series, Dragon Age Origins and Dragon Age II, into the creation of Dragon Age Inquisition. The game will feature larger environments with much more opportunity for exploration. BioWare has confirmed that multiple playable races are returning, both male and female.

I’m Load The Game’s co-founder and community manager, and whenever I’m not answering questions on social media platforms, I spend my time digging up the latest news and rumors and writing them up. That’s not to say I’m all work and no fun, not at all. If my spare time allows it, I like to engage in some good old fashioned online carnage. If it’s an MMO with swords and lots of PvP, I’m most likely in it. Oh, and if you’re looking to pick a fight in Tekken or Mortal Kombat, I’ll be more than happy to assist! Connect with me by email markjudge (@) loadthegame.com only
@@MarkJudgeLTG
Previous Project Zero aka Samsung Galaxy S6 specs leaked
Next Far Cry 4 gets a story trailer introducing new characters