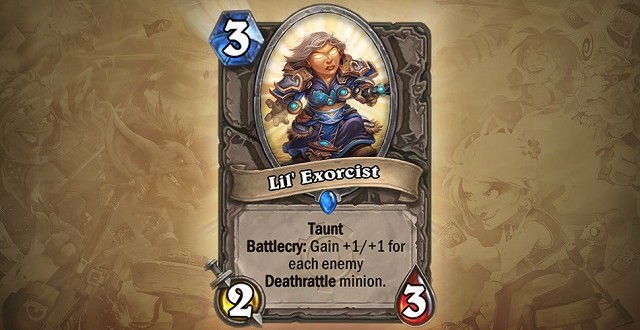 Goblins vs Gnomes, the first expansion pack for Hearthstone is expected to turn the meta on its head when it releases next month. Blizzard announced that the expansion will add more than 120 new cards to the game and more than a few of them will feature random and unpredictable effects. Among other things. these effects will arrive to the game in the form of Deathrattle. In Hearthstone this is a mechanic that usually triggers when a minion that comes equipped with it dies. Blizzard showed us that Deathrattle can be used in some very innovative ways in Curse of Naxxramas and they want to do it again in Goblins vs Gnomes as well.

In a recent article on the Hearthstone website, Blizzard talks about three upcoming cards that make use of Deathrattle in a new and unusual way. First off, we have Feign Death, a Hunter spell card that will trigger all the Deathrattles on your minions when you place it on the board. This card is incredibly useful as it allows you to trigger your Deathrattles at will without having to get your minions killed in the process. In combination with something like Sneed’s Old Shredder or Baron Rivendare, Feign Death will be ridiculously powerful. While Hunters will be able to trigger the power of death without having to kill their own stuff, Priests will resort to a very different tactic in Goblins vs Gnomes.

This class will be very strong against opponents with heavy Deathrattle decks as they have two minions that can use the enemy’s cards to their advantage. The first one is called Lil’ Exorcist and has a Battlecry that allows her to gain +1/1 for every enemy Deathrattle minion on the field. In addition, she also has taunt which will make her even more annoying. The second Goblins vs Gnomes card can also cause plenty of headaches for your opponent, although it can do the same to you as well if you’re not careful. The card goes by the name of Scarlet Purifier and deals two damage to all Deathrattle when you play it minions thanks to its Battlecry. Just so there is no confusion, by ‘all’ I mean your minions as well.

I’m Load The Game’s co-founder and community manager, and whenever I’m not answering questions on social media platforms, I spend my time digging up the latest news and rumors and writing them up. That’s not to say I’m all work and no fun, not at all. If my spare time allows it, I like to engage in some good old fashioned online carnage. If it’s an MMO with swords and lots of PvP, I’m most likely in it. Oh, and if you’re looking to pick a fight in Tekken or Mortal Kombat, I’ll be more than happy to assist! Connect with me by email markjudge (@) loadthegame.com only
@@MarkJudgeLTG
Previous The Crew will have a smooth launch according to Ubisoft
Next Xbox One had an “incredible” Black Friday according to Microsoft