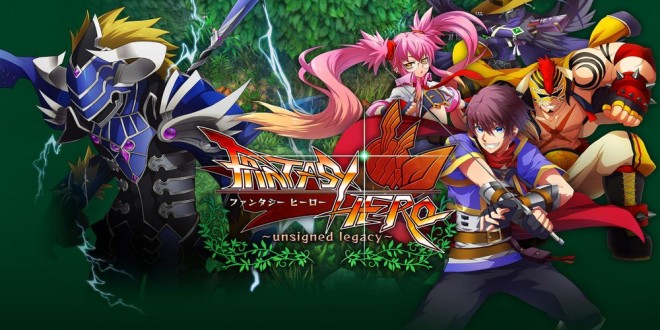 After much waiting, BlazBlue developer Arc System Works has finally announced the international shipping date for their hack-and-slash RPG, Fantasy Hero: Unsigned Legacy! This game has been kicking around in Japan since last year and, it was supposed to hit US shores in early December, but its (hopefully) final release date is set for February 10 for the US, and February 11 for Europe, the Middle East, and Australia!

In Fantasy Hero: Unsigned Legacy, the player can pick one of four heroes that range from a beefy luchadore to a cute inventor girl with a giant robot, and go on a hack-and-slash adventure with up to four players on local co-op. Gameplay is mission-based, and boasts unique playstyles for each character, the option to customize your character’s skills, and remodel and enhance weapons as you gain experience and complete missions. As an added bonus, two mission packs will already be available as DLC when Fantasy Hero: Unsigned Legacy launches. One will have post-game content, and the other will have new exclusive weapons. Both of them will contain five extra missions each. Extra color packs will be available for players who want to spruce up their characters, too, with some inspired by Arc System Works franchises like Guilty Gear and BlazBlue. A total of four will be available for download on release.

Fantasy Hero: Unsigned Legacy will be available on the Playstation Vita for 14.99 in the United States. Europeans will be paying € 9.99, and Australians will have to fork over around 14.45 AUD depending on location. For those of you who like having physical copies of your games, you’re out of luck; this one’s for digital release only. Fantasy Hero: Unsigned Legacy is also Playstation TV compatible.

If you want to take a look at the original launch trailer, you can do so here:

For all you Double Dragon Fans out there, I have some great news for you. ...