Breaking News
Home » NEWS » Terraria: Otherworld Will be Showcased at GDC, with Q&A 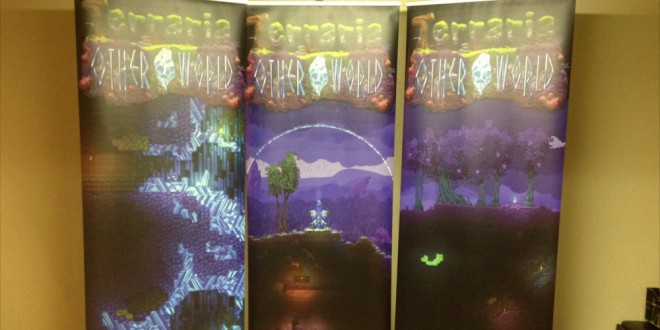 Terraria's successor, Terraria: Otherworld, will be showcased at 2015's GDC this week, which will be accompanied by a developer Q&A session.

Terraria: Otherworld Will be Showcased at GDC, with Q&A

Terraria developer Re-Logic has re-established in a thread post today – in its official community forums – that the upcoming successor to the 2D sandbox survival game, Terraria: Otherworld, will be showcased during this week’s Game Developers Conference (GDC). Both Re-Logic and the game’s co-developer Engine Software (which developed the console ports of the original Terraria) will have Terraria: Otherworld on display at Booth #2230, and they will be answering questions from media and other GDC attendees alike.

Terraria: Otherworld’s attendance at GDC was first revealed when the successor was announced back in mid-February, when a Q&A session was promised in addition to the game being showcased. The current state of the game will be available for all to see on Wednesday, March 4th through to the end of the event itself on Friday, March 6th. Until then, Re-Logic will be keeping the aforementioned thread post open so that the studio can add various amounts of information to it as the two developers build up to the GDC conference. Re-Logic’s community manager “Loki” coins the thread post as a “stream of consciousness-style blog,” which was created so Terraria fans would be in the know of what the two developers will be getting up to during GDC.

“Whenever we are able (and remember), we will share happenings from the trip [in this thread post]. [What we share] could be random insanity, news, spoilers, or really anything,” Loki said. “We have no ‘plan’ for this blog thread other than to share the experience with all of [Terraria’s fans].”

The thread itself will be locked to community interaction, however, as it’s intended to be used strictly by the developers only – “This thread will stay locked and reserved for blog entries,” Loki explained. For fans who want to discuss the contents of the blog thread, Re-logic has opened up another thread that’s dedicated to Re-Logic’s and Engine Software’s attendance at this year’s GDC. Those interested in Terraria: Otherworld are encouraged to check the blog thread often throughout the week.

Terraria: Otherworld is promised to expand on what the Terraria already is, with new concepts being explored based on what could’ve been added to the original game as well as what new direction Terraria: Otherworld’s gameplay may be taken. The successor itself is described to represent “a novel take on the Terraria experience.” While in the same universe as Terraria, Terraria: Otherworld will actually be set in an alternate dimension, where players will be tasked with restoring the world of Terraria to its former glory from the corruptive malevolent force that has consumed it.

Terraria: Otherworld is also promised to feature a combination of multiple gameplay elements from sandbox, role-play and strategy genres – “Terraria: Otherworld explores the Terraria experience in an innovative and unique way – providing a fresh approach to the ‘open world’ genre,” is how the game was pitched in its initial announcement.

Preferring to be referred to as "KingSongbird", Kieran is a serious, yet laid-back person with a particular soft spot for RTS games and anything Sci-Fi.
@KingSongbird
Previous Oddworld: New ‘n’ Tasty Patch 1.01 Released for PC!
Next Crowfall Kickstarter Raises $900,000 in First Week, Beats Goal

Unreal Engine 4 Is Now Free to Use

Terraria: Otherworld will be set in an alternative dimension of the Terraria universe. Release and platform info have yet to be revealed.