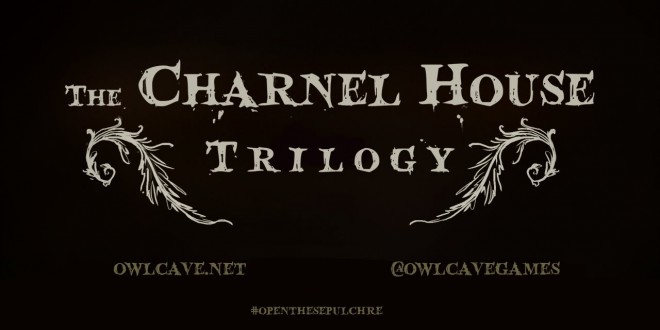 Today, the Indie game developer Owl Cave, along with the independent publishing studio Mastertronic, unveiled their full cast of voice actors for their special edition point-and-click adventure game series called The Charnel House Trilogy. The trilogy takes their most recent free to play, horror game, Sepulchre and adds both a prequel and sequel. The two new games are Inhale and Exhale. The story was written by Ashton Raze and the additional games are meant to expand upon the narrative of the first game and add in some additional characters.

If some of these names that are mentioned in the cast trailer do not sound familiar, or they do but not as voice actors, that is because there is quite a mix of personalities in this cast. Several of them are writers. Madeleine Roux is the New York Times bestselling author of  the horror novels Asylum and Sanctum. Peter Willington is a writer for Pocket Gamer and Editor for AppSpy. Soha Kareem is a writer and experimental artist. Meanwhile, there are other individuals with more voice acting experience. Kelsey R. Marquart starred in the shorts Double Cross and No Laughing Matter. Elspeth Edmonds is a voice actress for White Paper Games and is currently working on the game Ether One. Cara Ellison is a game narrative designer. Abe Goldfarb has done voices in the games Blackwell Epiphany, Resonance and Gemini Rue, among others and Ashly Burch is best known for playing Tiny Tina in Borderlands 2.

Video game journalist and YouTube personality Jim Sterling is also part of the cast. He stated “The Charnel House Trilogy’s script made me feel deeply unpleasant and caused my skin to crawl. I shuddered recording the lines I had to record, as it made me feel uncomfortable. That’s why I’m so thrilled to be working on the project.” Madeleine Roux commented on it as well, saying that she is a huge fan of the team’s past work and that “it’s been an absolute pleasure and privilege to be involved with the trilogy. When I saw the script there was no hesitation in accepting the role – the story has one of the best and most shocking twists I’ve seen in a long, long time. I think players will really connect with the creepy, slow-burn atmosphere and top-notch characterization.”

Owl cave is a collective of designers, writers and other individuals that got drawn into games. They focus on character creation and narrative. They created the free-to-play game Masked as well as the game Richard and Alice in 2013. They also have plans for a side scrolling puzzle game called Location Services in the future. A few members of the team are currently working on improving Starbound while it is still in Early Access. Mastertronic is a independent games publisher. They have helped publish games like Runers and Concursion. The music in the trailer was created for the game series by Film, TV and game music composer Gavin Harrison. The game’s art was made by Ben Chandler. The game is set to release on April 16th and will be available on Steam.

I’m Load The Game’s co-founder and community manager, and whenever I’m not answering questions on social media platforms, I spend my time digging up the latest news and rumors and writing them up. That’s not to say I’m all work and no fun, not at all. If my spare time allows it, I like to engage in some good old fashioned online carnage. If it’s an MMO with swords and lots of PvP, I’m most likely in it. Oh, and if you’re looking to pick a fight in Tekken or Mortal Kombat, I’ll be more than happy to assist! Connect with me by email markjudge (@) loadthegame.com only
@@MarkJudgeLTG
Previous OnePlus One price rising in Europe due to bad exchange rates
Next Steam Greenlight Spotlight: Solar Crusaders