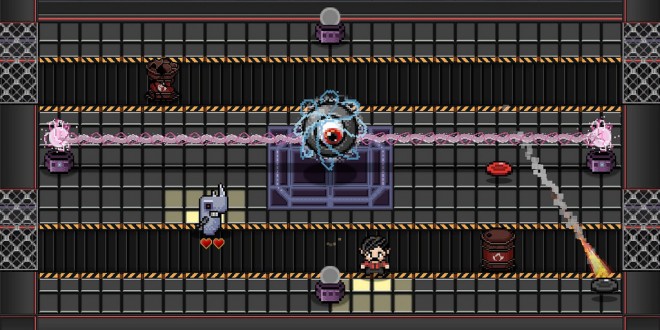 Today XMPT Games and Mastertronic announced a new arena-based combat game, DiscStorm. You may have heard of the project back in March of last year when they first started working on it. They were calling it Frisbee Combat League. The indie game will “tests your mettle” as players lob flying discs, which then ricochet off the arena walls at dangerous speeds. Whether the discs are thrown at friends or non-player character zombies, quick reaction time will be crucial. The developers have said that there will be multiple game modes including a first to ten brawl and a survival mode called “Death Disc” where one hit kills. There are also plans for a single player adventure mode, full of of unique and challenging monsters such as laser shooting stone golem. In it players will be able to unlock costumes for the cast of characters as well as new environments. Current arenas include a haunted mansion, a robot factory, and a jungle temple. However, more are in the making.

DiscStorm plans to blend elements of  ‘90s gaming with today. The music in it will blend modern dance with retro chiptunes and the art will be composed of high quality, retro, pixel art. Richard Pilot, XMPT Games’ programmer, explained that the game started out as a personal project that he made a prototype of during a Christmas break. He and his team of three other friends, each with their own day jobs, enjoyed it so much they sought out Mastertronic to help make it even better. XMPT Games has previously made the games Penguin Party and Monster Hotel.

Stuart Morton, the producer at Mastertronic said “Playing DiscStorm for the first time will have you laughing, crying, swearing and itching for another round.” Mastertronic has helped publish a large number of other indie games including Richard & Alice and Montague’s Mount. A demo of DiscStorm will be available for play at EGX Rezzed, in London, this weekend. The game will allow for local cooperative play but will also have online multiplayer functions. DiscStorm plans to launch this summer on PlayStation Vita, PC, Mac and Linux. Check out their announcement trailer below.

I’m Load The Game’s co-founder and community manager, and whenever I’m not answering questions on social media platforms, I spend my time digging up the latest news and rumors and writing them up. That’s not to say I’m all work and no fun, not at all. If my spare time allows it, I like to engage in some good old fashioned online carnage. If it’s an MMO with swords and lots of PvP, I’m most likely in it. Oh, and if you’re looking to pick a fight in Tekken or Mortal Kombat, I’ll be more than happy to assist! Connect with me by email markjudge (@) loadthegame.com only
@@MarkJudgeLTG
Previous Android 5.1 gets massive changelog and factory images
Next Steam Greenlight Spotlight: Luckslinger