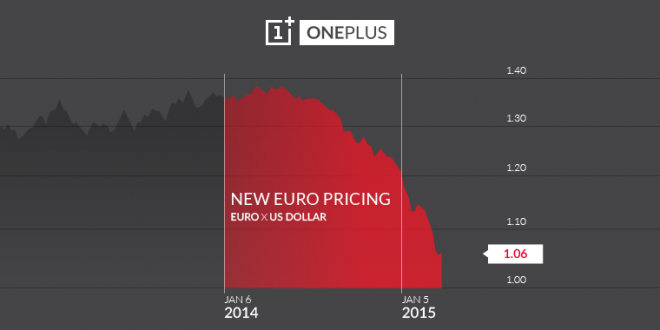 Gear up: OnePlus One price is rising in Europe

OnePlus have announced that the OnePlus One price will be subject to an increase in Europe due to the drop of the Euro’s value recently. Although the company is famous for pricing their devices incredibly low, thus being able to successfully compete against big brands like Samsung and Apple, they could not have anticipated the steep drop in Euro over the past few months. We’ve seen the dollar value increase a lot in the past few weeks, but the Euro has exponentially dropped. affecting OnePlus One profits.

According to the company, the OnePlus One was already being sold in Europe with a low profit margin, and with the continuous drop in value of the currency, their profit margins will be close to zero. The increase in price is about 17 % compared to the 25 % drop in Euro value, which seems like a fair pricing option for the OnePlus One. Forum members and fans of the flagship killer praised the move from the company, appreciating the transparency and the warning that they issued ahead of time.

The new OnePlus One price will go official on March 25, which means that those in Europe interested in buying the handset should hurry up and get it on next Tuesday, which will offer up the OnePlus One at the original price of €269/€299. The new prices will be €299 for the 16 GB white version and  €349 for the 64 GB version. While that looks like a bit much for a smartphone that is already a year old and has become outdated as a flagship killer, fans are still content with the pricing, because it’s still lower than flagship prices around the world. We don’t know whether OnePlus will reconsider the pricing of the handset if the Euro starts rising again, but fans are definitely hoping for that.

At least accessories won’t be affected in their pricing, according to the official blog post from the company. Seeing as the company is constantly expanding to new markets, the move seems logical if they want to make at least some profit out of their sales. Even though OnePlus is appreciated for the low prices they put on products, fans seem to understand that it’s still a company and it still needs to make some profit. The US price of the phone will remain the same, so this piece of news only concerns European customers.

My life-long dream has been to test out every gadget on the market! Considering the fact that I've rapidly destroyed almost every gadget I've had so far, I'm not inclined to owning something, so my ideal outcome would be to have a different gadget each month. I'm really into smartphones, wearables and tablets and I love Playstation and Xbox, I'm sure I'll beat you at your own game (after a month of training... or two)
Previous Apple TV has its eyes on cable TV companies
Next Owl Cave Announces Voice Actors for The Charnel House Trilogy

OnePlus One CM12 S official delayed, as well as OxygenOS

Carl Pei has taken to social media to announce OnePlus One fans that the long-awaited ...