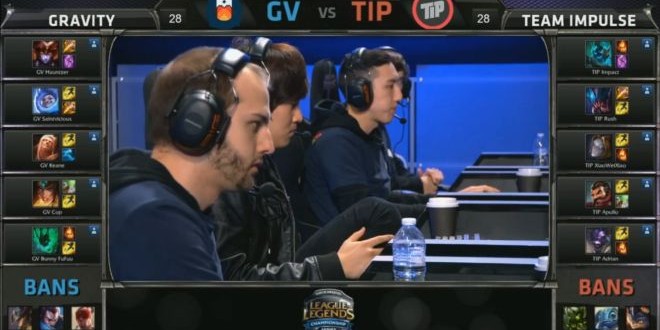 The Semi-Finals for the NA LCS Spring Playoffs concluded on Sunday as defending champions Team Solo-Mid faced off against LCS newcomers, Team Impulse. TSM has long been considered the best team in the North American LCS. Since the league’s creation, there has not been a single finals which the team has not played in. With a roster featuring some of the best individual players from around the world, Impulse looked to try to become the first team to stop TSM from reaching the LCS finals.

Team Impulse is often known to win or lose games because of aggressive plays made by their Jungler, Rush. In game one, however, Impulse came out with a different strategy. Rush played Nunu and instead of focusing on ganking for his lanes, he focused on controlling objectives around the map. This resulted in Impulse getting five dragons around 31 minutes into the game. Though TSM were able to keep fights close, they eventually could not keep up with the objective-based play from Impulse as Impulse was eventually able to win game one.

In the second game, Impulse once again put Rush on Nunu. Though Impulse was not able to control dragons as well as the first game, they were able to heavily win bot-lane, making TSM’s AD Carry, Wild Turtle, fall far behind. However, TSM’s mid-lane, Bjergsen, was able to get ahead and keep Impulse down until Wild Turtle was able to catch back up. Once Wild Turtle reached the late game on Jinx he was able to completely destroy Impulse who had no one to really pressure their back line. This allowed TSM to tie the series up 1-1.

In the third game, both teams reverted back into the play styles that they are known for. Rush was back on a high impact jungler with Lee Sin and Impulse’s mid-lane XiaoweiXiao played Twisted Fate, who he is well-known for. TSM was able to get Bjergsen on Leblanc and they put a lot of focus into getting him ahead. They were able to completely shut-down XiaoweiXiao while also not losing their other lanes, giving them a rather easy win.

Facing elimination in game four, Impulse put Rush on Nunu again and attempted to run a “protect the Kog’Maw” team composition with Apollo on Kog’maw. However, TSM’s Wild Turtle played Corki and was able to get far ahead of Apollo. Without another real damage threat on their team, Impulse quickly found themselves behind and with no real way to get back into the game. This led to another TSM win, allowing them to take the series with a score line of 3-1.

After an exciting weekend of League of Legends the teams competing in this season’s LCS finals has finally been decided. This result is not exactly a surprise as TSM and Cloud 9, who won Saturday, finished in the top two spots during the regular season. They have also met each other in the finals for the past three seasons. Regardless, this season’s finals, which takes place next Sunday, will definitely be the most important finals for both of these teams. This is the first year that the LCS will be using circuit points to decide which teams will represent the region at Worlds. If this season has shown us anything, it is that the North American region is much more competitive than it has been in previous years. Both TSM and Cloud 9 will be more than happy to grab as many points as possible along with the title of being the best League of Legends team in North America.

When I am not studying, I spend most of my time playing games or following various eSports events. Primarily play PC games, particularity MMORPGs and MOBAs
@TeddyGamer55
Previous Wolfenstein: Bringing Back the Real Nazi Zombie
Next Slow Down, Bull: Insomniac Games’ First PC Release