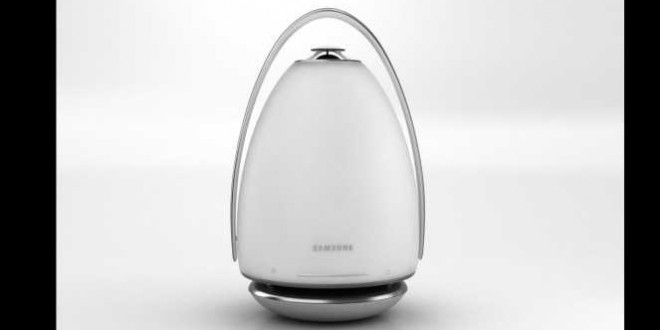 Samsung recently offered tech website, CNET, a demonstration of their new Wireless Audio 360 speakers. The odd, rugby ball shaped devices are, as stated by Jurack Chae—Senior Vice President of Samsung’s R&D Office—intended to create “sound without sound, if you catch my drift. Non-directional, omni-directional.” Judging by the article, its writer, Cho Mu-hyun, was quite impressed with the “dinosaur egg” speakers.  Samsung’s test room included a number of the speakers scattered about with a few even suspended from the ceiling. When challenged by Chae to determine which speaker was producing music, Mu-hyun was forced to concede that he had “no clue which speaker [was] the culprit,” and that “The sound quality doesn’t seem to change, no matter where I’m standing.”

The Wireless Audio 360 has been a long time coming, beginning development in 2012. Samsung Vice President of Sales and Marketing, Min Lee, readily admits that Samsung has no particular attachment to the gimmick of a football-shaped speaker and that their “focus in the series is the continued application of our proprietary Ring Radiator technology.” Indeed, fourteen sound engineers from multiple countries were brought in to aid in the Ring Radiator’s development.  According to Mu-hyun’s article, the intent of the configuration is to “[place] the sound source at the bottom-center of the speaker, and the compressed air projects sound out in all directions.”

Samsung’s rugby-speakers don’t come cheap, however. Currently available in the United States and South Korea in traditional standing as well as ceiling-suspended configurations, the Wireless Audio 360 comes in at five-hundred dollars.  Even Chae stated that “questions remain on how wide and diverse consumers will enjoy the Wireless Audio 360 [. . .] We must continue to observe the market trend to stay competitive.” Market reaction will show in time whether or not Samsung’s investment was a sound one.