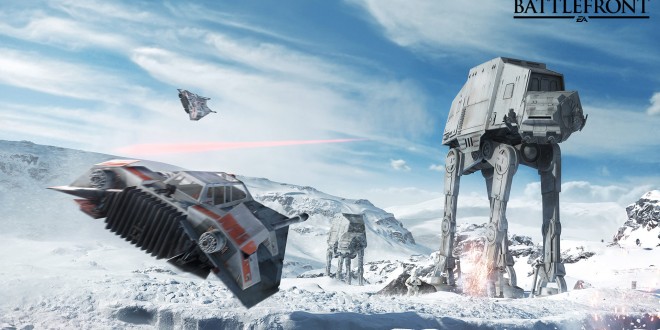 The last time we saw Star Wars Battlefront on consoles was in 2005. Since then, the Battlefront series has consisted of two PSP titles, one mobile game, and at least two cancelled sequels (that we know of). Finally, though, Star Wars Battlefront has returned. It’s not as amazing as I remember it being, and the content is somewhat light, but overall it’s a cool experience. It’s not perfect, but the more time I spend with Battlefront, the more I like it.

Like other games in the series, Battlefront is an action shooter that you can either play from a first or third person perspective. You’ll be using classic Star Wars weapons and vehicles like thermal detonators, imperial and rebel blaster pistols and rifles, AT-ATs, speeder bikes, TIE fighters, and X-wings. You can also play as iconic Star Wars characters. Luke Skywalker, Leia Organa, Darth Vader, Emperor Palpatine, Han Solo, and Boba Fett are all playable characters. In addition to your blaster, you can have a loadout of additional materials to up your arsenal. These come in the form of cards. You can pick standard star cards two cards as well as one charged star card. The standard star cards cards give you things like grenades, jetpack-like jump boosters, and special blaster pistols. Charged star cards are a bit different, and they’re more special. These include things like increased accuracy, explosive bolts, and personal shields.

With these resources at your disposal, you’ll be completing objectives. There are classic game modes like Blast (Team Deathmatch), Cargo (similar to capture the flag), as well as Supremacy and Drop Zone (territory control modes), as well as some more unique modes like Fighter Squadron (aerial warfare), and a few modes that focus on classic Star Wars characters (Heroes vs Villains, Hero Hunt).

As you can tell, Battlefront is a game that’s aimed at fans of the series. While the core gameplay has a lot to offer, your enjoyment of Battlefront depends heavily on your level of Star Wars fandom. Hardcore Star Wars fanatics are going to quickly get addicted, while those who aren’t familiar with the source material are probably going to get bored. 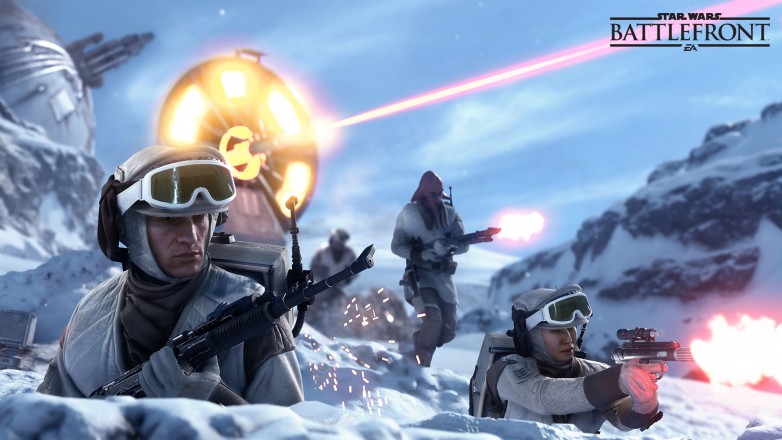 The focus of Battlefront is online multiplayer, and this is where the game shines. Matches range from small 8v8 skirmishes to enormous 40 player battles. If you’re looking for something intense, jump into a huge match of Supremacy or Walker Assault. If you’d rather play a tense match on a small team, hop into a match of Drop Zone or Blast.

No matter what mode you pick, though, you’re bound to have a good time. Matchmaking is quick, connections are generally stable, and a partner systems lets AI take the place of players who drop out or fill spots that weren’t filled – you’ll always have a full team, and the matchmaking and balanced AI keep the teams relatively well balanced.

To sum it up, the multiplayer is the reason you’ll keep playing Battlefront long after you’ve gotten over the initial novelty of a Star Wars themed action shooter. 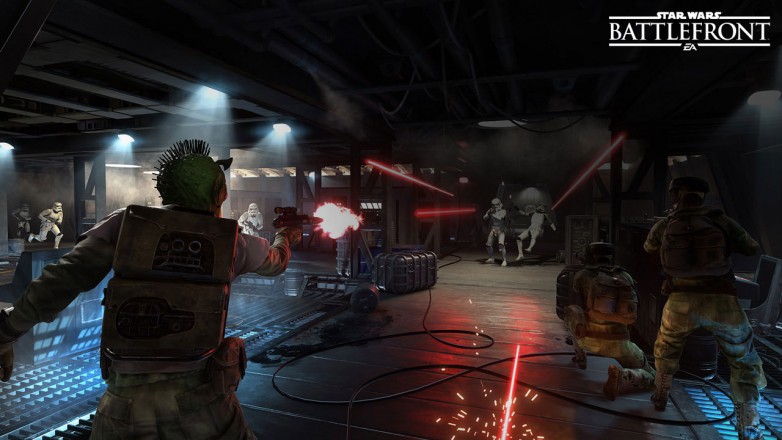 Battlefront lacks a full single-player campaign, but there are some entertaining modes that you can play on your own or with a friend via couch co-op. First are the training missions, which are more like objective-based time trials than tutorials. Ground combat, a speederbike chase, and epic dogfights are all here, and it’s fun to compare your time and score to that of your friends.

You can also play survival, battle, and hero battle modes. Survival is just what it sounds like – you’ll arm your character and fight to survive as many waves of enemies as you can. This is the best mode to play with a friend via couch co-op. If you don’t have someone to play with and you don’t want to take on the challenge alone, you can get matched up with someone online. Next to the online multiplayer, survival mode is definitely the best mode in Battlefront.

Hero Battle lets you pick a playable Star Wars character and lay waste to your enemies. This is where you can rip through dozens of enemies with a lightsaber or crush a rebel with a devastating lightning attack. There’s not a lot of depth here for those who aren’t Star Wars fan, but fans like me can easily get hooked on Hero Battles. Standard battles are similar, but you’ll play as your custom character.

Though the lack of a campaign is a bit disappointing and the solo modes are less exciting than the online multiplayer, it’s still a good time. It’s undeniable, though, that the solo experience of Battlefront could have been much better. 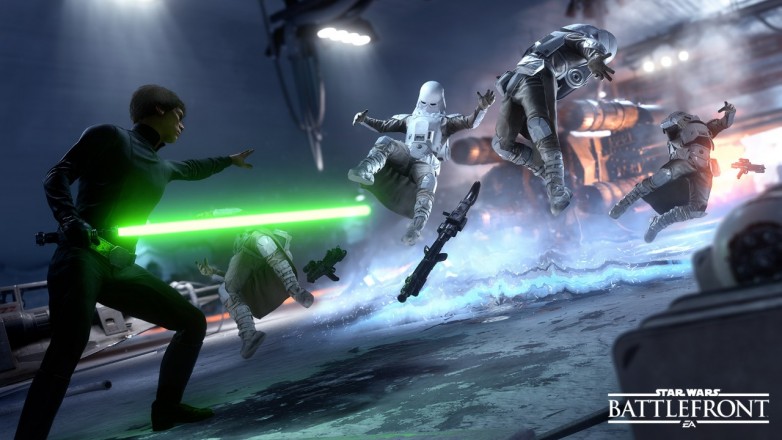 The Sights and Sounds of Battlefront

Battlefront looks absolutely fantastic. When you’re sneaking through ice tunnels on Hoth and running through the forests of Endor, it’s sometimes hard to focus on your objective because of the stunning visuals. This is by far one of the best looking sci-fi shooters I’ve ever played. I played the Xbox One version, but both the PS4 and PC versions also look fantastic.

The game also sounds really awesome. You’ll hear the classic John Williams Star Wars themes as well as a pretty awesome score from Gordy Haab. The score is awesome, but the real excitement is when you hear one of your favorite Star Wars themes.

The truth, though, is that you won’t really be hearing a lot of the music over the sound of heavy blaster fire, explosions, and speeding starships. When you do hear it, though, you won’t be disappointed. 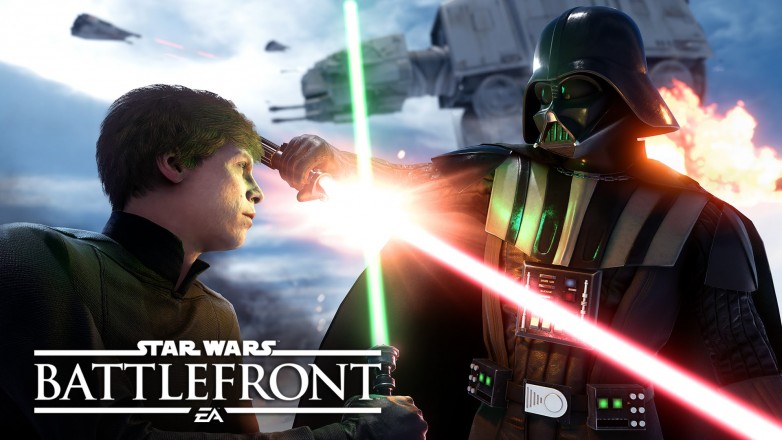 There are a lot of things about Battlefront that are incredible. Unfortunately, though, there are some things that hold the game back. The thing that annoys me the most about Battlefront is the leveling and unlocking system. Like most online shooters, you’ll level up as you play. In most games, new gear is unlocked as you level up. In Battlefront, though, there’s an extra element: in-game currency.

As you level up, you will indeed unlock new weapons, cosmetic items, and star cards. However, you then have to purchase these items with in-game currency (credits), which is given out based on your performance in each game. The objectives you complete, your score, and the total experience points you earn are transformed into credits after being awarded.

Credits are not available for purchase with real money, which is nice, but it can be frustrating to unlock really awesome stuff and not be able to use it because you don’t have enough credits. It does give you a reason to play more, but it does seem somewhat archaic to lock things behind both levels and an in-game currency system.

There is also a somewhat light amount of content here. There are a lot of game modes, but a small amount of maps and heroes / villains. EA promises to expand with DLC packs, but it would be cool to have had a few more maps to play through. It’s also sort of disappointing to have no heroes or villains from the new Star Wars film. Thankfully, we do have the planet of Jakku to play on, but after a few hours of playing, things can get a bit repetitive. 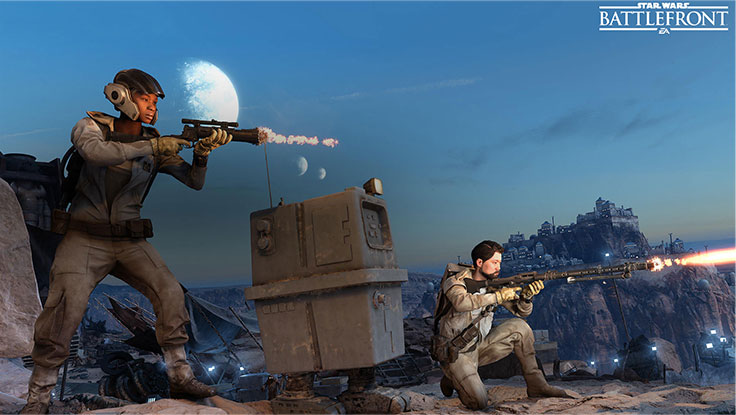 Star Wars Battlefront isn’t perfect. It’s not as incredible as I remember the older titles being, but it’s still a lot of fun. If you’re a fan of Star Wars, you’ll definitely want to give Battlefront a try. It’s not a game that I’m going to be recommending to everyone – especially given the large amount of sci-fi shooters that we saw in 2015. However, it must be said that Battlefront is an action shooter that looks, sounds, and plays great, even if its content feels a bit thin and repetitive at times.

Star Wars Battlefront boasts a great multiplayer mode, but its sub-par solo mode and archaic unlock system keep it from being incredible.

I'm Aria! When I'm not doing other things, I'm either playing video games or writing about them. If you like games, anime, and random stuff, you can follow me on Twitter @Sage0fForest
@@Sage0fForest
Previous VR headsets are here! Kind of. Oculus Rift pre-orders available soon
Next Rise of the Tomb Raider gets a PC release date