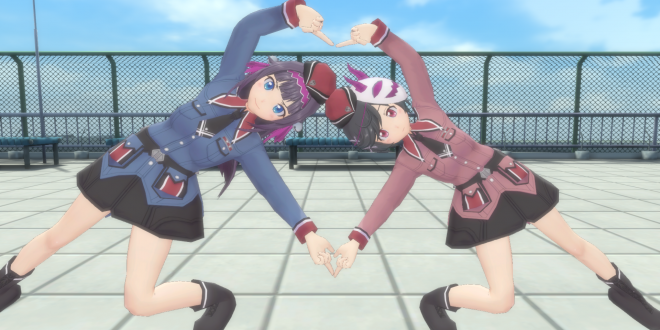 Gal*Gun: Double Peace is something I never expected to make it to the West. It’s a rail shooter with light dating sim elements. Instead of shooting zombies or soldiers, though, you’ll be aiming for cute anime girls. You’ll have to shoot them with pheromones to keep them off of you, because everybody is suddenly in love with you. All the while, you’ll be chasing your true love in one of multiple routes that, all together, lead to eight different endings.

The story in Gal*Gun: Double Peace is extremely light. Your character, a faceless high school boy, is shot with an arrow by an aspiring Cupid angel. Unfortunately, the angel accidentally super-charged the shot. Consequently, you’re irresistible to every girl in existence for one full day. You’re also surrounded by cute anime girls. It sounds like an otaku fantasy (and it’s clearly on purpose), but your character actually isn’t too excited by the idea. That’s because, if you don’t find your one true love by the end of the day, you’ll never get another chance. That means you’ll be navigating through the day, trying to get together with your true love while simultaneously fighting off hordes of infatuated girls.

There are a few ways to look at this set-up. The first (and easiest) is that it’s a perverted otaku fantasy that could be turned into hentai with a quick mod. However, the fact that your character is so turned off by the girls that are giving themselves to him brings another interpretation to mind. It’s possible that the developers meant for the game to be a gender swap experience in which the harsh reality of catcalling and sexual harassment is turned on its head – in order to expose its ridiculous nature. At first, the concept sounds so silly and insane that you wonder how somebody came up with it. However, after you think about how much this kind of thing happens to women every single day, you realize that it’s not that ridiculous after all. That might be a very optimistic idea, though. It’s just as likely that it’s just a ridiculous fantasy.

I haven’t played the Japanese version, so I don’t know if any sort of point comes across better in that version. In the English version, though, it’s hard to be sure what exactly (if anything) is meant by the story – it does come across as pure fan-service madness. Either one of the above interpretations could be true. There’s just not enough information in the game for us to know for sure. Even though there are different ways to look at it, I certainly wouldn’t blame anyone who wants to stay away from Gal*Gun: Double Peace because of its heavy fan-service. At the same time, I didn’t find the game so disturbing that I myself felt the need to put it down because of what it may or may not mean. A select few games like this infuriate me, but this was not one of them. In fact, I actually had a pretty good time with the game. 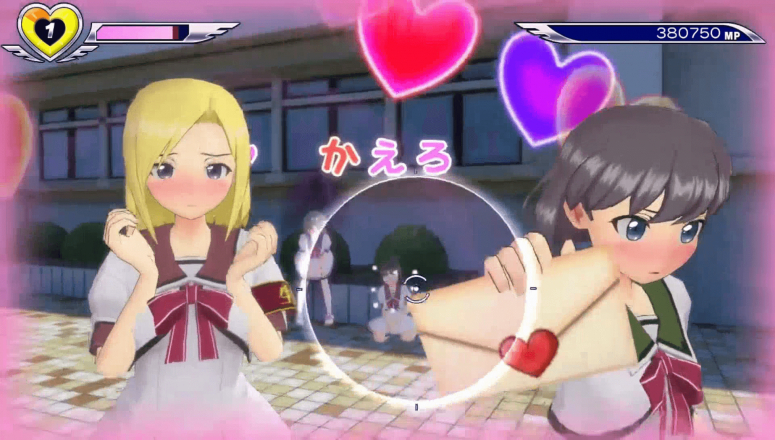 Gal*Gun: Double Peace is a rail shooter. Imagine a Time Crisis (or maybe House of the Dead), but instead of being obsessed with blood, guns, and gore, the concern is more focused on anime girls in schoolgirl uniforms who are designed to be as moe as possible. It’s a bloodless shooter, which is an interesting concept on its own.

You can move your target about the screen, as well as zoom in and slow the speed of your aiming by holding down a button. The control scheme that comes pre-set is a bit frustrating, so I recommend tweaking it to your liking. You definitely want to be comfortable with aiming and shooting, because it’s what you’ll spend most of your time doing. Your character will slowly advance through the stage, and it’s your job to rack up as much MP as possible by shooting girls with your pheromone gun, entering doki doki mode, finding collectibles, and completing side quests.

I’m going to be honest: the arcade rail shooter elements of Gal*Gun: Double Peace are actually pretty good. I played through the game five full times, and I consistently found new ways to make my times better, bring my scores to new levels, and complete more side quests.

The downside is that there’s a lot of unnecessary stuff. Doki doki mode is ridiculous. On Vita (where I played the game), it consists of rubbing the screen to, uh, excite up to three girls to the point where they throw double peace signs (hence the game’s title) – they then collapse and a pink explosion goes off, incapacitating all the girls on screen. This mode, along with the embarrassing QTE events (one involves helping a girl get out of a window that she’s “stuck” in, and another has you freeing another girl from demon trapping goo – yeah, I know). These are the things that hold the game back from getting a better gameplay score. If it just stuck to the rail shooter style, it might not have been as exciting for those looking for fan-service, but it would have been a much better game.

The presence of so many endings, the relatively short play time, and the inclusion of a score attack mode make replay value high. If you like the game, you’ll definitely have no problem finding reasons to go back and beat your high scores, find new student handbooks, fulfill requests, and reach new endings. There are even quite a few places where you have to pick one of two paths, which boosts replay value even more.

I found nothing overly exciting about either the audio or the visuals in Gal*Gun: Double Peace on Vita (though it may be different on PS4). They’re definitely decent, though the frame rate tends to stutter when there are too many girls on screen or when your character is jumping over obstacles or changing routes. It’s just that nothing was particularly impressive about these elements. The music is forgettable, the voice acting is alright, and the environments (as well as the character models) start to all blend together after a while.

If it weren’t for the impressive shooter elements, the very average audio and visuals would be a bigger problem. I was so focused on the actual gameplay, though, that it didn’t bother me too much. If I hadn’t been playing it for a review, I probably wouldn’t have noticed as many faults as I did. 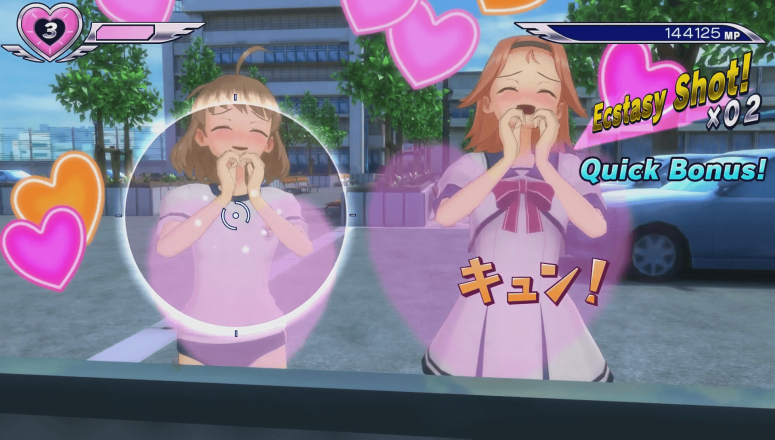 Gal*Gun: Double Peace is a hard game to review. On one hand, the story is absolutely ridiculous. It may or may not mean anything at all, and it’s understandable that some players would be offended by it. On the other, it does so well as a light rail shooter that it’s fun to play. This is definitely something that’s hard to recommend. If you watched the trailer and found it disgusting, stay away from the game. If you watched it and laughed at its ridiculous nature and were intrigued by the classic arcade shooter feeling, you might want to think about picking Gal*Gun: Double Peace up at some point. I didn’t expect to enjoy this game at all, but I ended up having an enjoyable time with it. Who knows? Maybe you will, too.

I'm Aria! When I'm not doing other things, I'm either playing video games or writing about them. If you like games, anime, and random stuff, you can follow me on Twitter @Sage0fForest
@@Sage0fForest
Previous Making Halo’s Spartans fight in ScrewAttack’s Death Battle: An interview with Chad and Torrian
Next We Happy Few – First Impressions