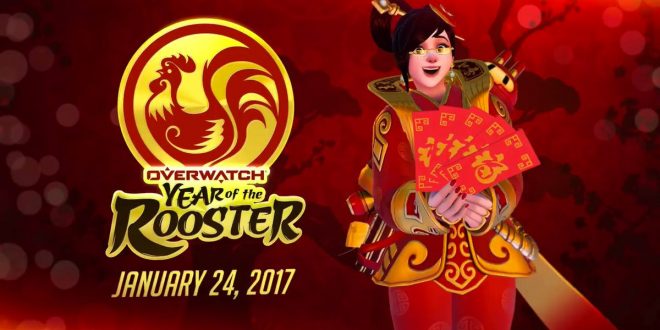 A couple of weeks ago, I theorized that Overwatch might be getting a Valentine’s Day event. It seemed that I don’t have a future in fortune telling, because that doesn’t seem to be happening. The bad news here is that anyone who wanted their favorite character in hot pink will be disappointed. The good news is, however, that we are still getting an event. It’s just turning out to not be the event that we thought it would be. So what is the event that has come to Overwatch? Of all things, it’s about the Chinese/Lunar New Year, specifically the year of the rooster.

This event works much like other events in Overwatch. Unique skins, emotes, and other items have been added to the game. They can be earned during the event, whether by paying high in game prices or earning them from loot boxes. All of the items have a theme based around Chinese/Lunar New Year. These items will be freely accessible to those who earned them, but forever locked off to others. Some have shown frustration to this policy even since it was first introduced. Sadly, it seems to be a part of Overwatch not, for better or for worse.

In an added bonus, a brand new game mode has been added to Overwatch, capture the flag. A rather tried and true game mode, but not one that is unwelcome. It works exactly how one might suspect, with a few new tweaks. In order to pick up the flag, a player must stand on it for a couple of seconds. If that player is damaged by an enemy, the timer restarts. It adds an interesting element to the territory control element of capture the flag. What’s more, your first capture the flag victory comes with a free loot box.