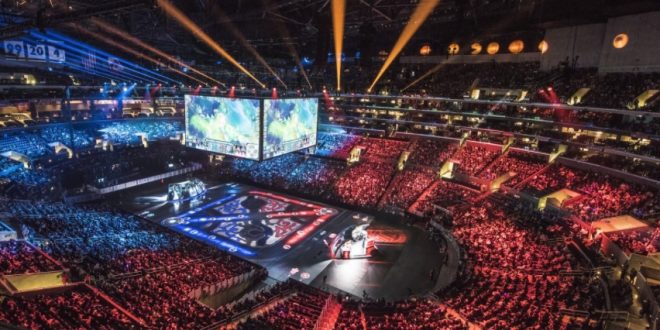 There will come a time in the not too distant future when eSports will overtake traditional sports in terms of popularity. Competitive gaming’s status has skyrocketed in recent years and it is now a multibillion-dollar industry, with legions of fans spread across the globe. Rather than reacting with fear and fury, traditional sporting franchises are embracing it and carving out huge chunks of it for themselves. Fierce NBA rivals Golden State and Houston own eSports teams and their recent clashes on Summoner’s Rift have been as intense as their meetings on court. Soccer club Paris Saint-Germain owns a team that has been successful at FIFA 18, New England Patriots owner Robert Kraft has snapped up an Overwatch team and FC Copenhagen owns a CS:GO team that won DreamHack Montreal. These sporting franchises are taking eSports to the next level and massively increasing their footprint by introducing them to new fan bases.

It is proving to be a lucrative enterprise. eSports was worth $1.5 billion as an industry in 2017 and it is tipped to rise to $5 billion by 2020. Sponsorship deals are huge. Mountain Dew and Red Bull sponsor teams and tournaments, Intel back the Extreme Masters and technology giants like T Mobile and Samsung have sponsored teams. Wagering is also massive as millions of fans are deeply knowledgeable about the teams, stars and games. eSports betting will be a multibillion-dollar industry by 2020, and it will soon overtake traditional sports like hockey and golf, before taking on the likes of football and basketball. Heritage sports will have odds, make sure to check them out and you will find all manner of betting options on big and small tournaments taking place across the world.

eSports are becoming a lot more popular than traditional sports among younger generations, who have grown up immersed in technology. As they’re obviously the future, traditional franchises are safeguarding their own futures by capitalizing on the trend. “We have been exploring the eSports market for a number of years and have been waiting for the right opportunity to enter,” said Kraft after his investment in the Overwatch League was announced. “The incredible global success of Overwatch since its launch, coupled with the League’s meticulous focus on a structure and strategy that clearly represents the future of eSports made this the obvious entry point for the Kraft Group.”

Discussion the latest generations, the Millennials and Generation Z, Kraft added: “They don’t watch traditional sports products the way our generations did. You see how much time is invested in playing these games and how they can connect to a global audience while doing it is unheard of to us 10 or 15 years ago. We really believe this is the future.”

He is not alone in his belief. eSports is fast developing from a Wild West into an organized, exciting and profitable venture, and the likes of Kraft are helping to fuel that growth. Mark Cuban, owner of the Dallas Mavericks, has his own eSports team, as does LA Lakers legend Shaq O’Neal. ESPN now has a dedicated eSports section and write-ups of tournaments are becoming increasingly widespread, even in mainstream titles like The Daily Mail.

The NBA has just launched an NBA N2K league and it has drafted 102 gamers to take part. They are on six-month contracts worth $32,000 to $35,000 to simply play NBA 2K. Makes you wish you skipped college and stayed at home playing video games. The job includes housing, medical insurance and a retirement plan. But if you think that sounds good, it pales in comparison to the earnings of the top players of Dota 2 and League of Legends: Kuro “KuroKy” Taksahomi earned more than $3.5 million playing Dota 2 last year, and 48 players earned more than $1 million. eSports is clearly a juggernaut and many people are having a great time and earning a great living by jumping aboard.

I’m Load The Game’s co-founder and community manager, and whenever I’m not answering questions on social media platforms, I spend my time digging up the latest news and rumors and writing them up. That’s not to say I’m all work and no fun, not at all. If my spare time allows it, I like to engage in some good old fashioned online carnage. If it’s an MMO with swords and lots of PvP, I’m most likely in it. Oh, and if you’re looking to pick a fight in Tekken or Mortal Kombat, I’ll be more than happy to assist! Connect with me by email markjudge (@) loadthegame.com only
@@MarkJudgeLTG
Previous How Much Do Casino Streamers Actually Earn?
Next Ludum Dare 32 winners – if games were jam, which would have the best graphics?