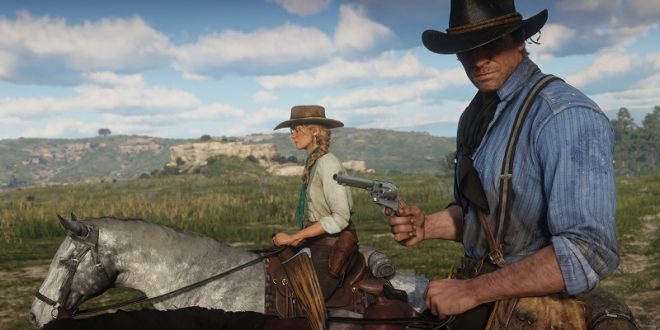 Fans have been waiting quite a while for the first look at gameplay for Red Dead Redemption 2, and now the day has finally come. Developer Rockstar Games has released the first official gameplay video for the game, providing just over 6 minutes of content that is taken entirely from in-game footage.

What is made apparent from the get-go is that the game’s world is huge, and is packed with variety. Players will be able to explore it to their heart’s content, though there is also a deep narrative for players to follow. Players will set up camps throughout the game, where a variety of activities will take place. You will help with food and supplies, while also getting closer to the game’s characters.

You also have several different ways to go about completing the game’s tasks, as you can go in guns-blazing, brawl it out in hand-to-hand combat, or even use your persuasion skills to get yourself out of (or into) hairy situations. You will be able to make friends and enemies with the various characters you come across, which is entirely up to you. All actions have consequences, and your choices will decide how honorable (or dishonorable) protagonist Arthur is.

Shooting and hand-to-hand combat have been majorly improved since the last game, resulting in a more deep and engaging gameplay experience. Each weapon has their own unique characteristics, with realistic animations that give an authentic gunslinger feel.

You will also be able to bond with your horse, and your relationship with the animal depends entirely on how you treat it. Some breeds are better at performing certain tasks than others. You can even use your saddle and saddle bag to store extra weapons, as well as supplies and animal carcasses that you’ll pick up while out in the wild. As time passes, your bond with the horse will grow, which will make it easier to control in tense situations.

The game’s ecosystem is filled with all sorts of animals, including predators, prey and scavengers. While some will stay out of your hair, others are very deadly and must be watched out for at all times. Hunting is an important aspect of gameplay, as it helps your camp and can also get you extra money.

Red Dead Redemption 2 will release for PlayStation 4, Xbox One and PC on October 26th. Be sure to check out the first official gameplay video below.