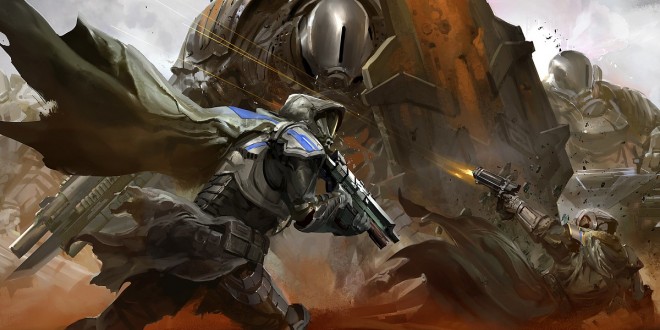 Destiny gets some great new screenshots

Destiny is arguably one of the most highly anticipated FPS games of the year, next to Titanfall, which will be releasing in March. As a consequence, Bungie understands the importance of keeping fans hyped and happy, and has released two new screenshots for our viewing pleasure. If they seem somewhat familiar and appear to have a resemblance to Halo titles, that’s because the artwork is fairly similar. After all, the team working on Destiny is the same team that brought the Halo franchise to fruition. Destiny will differ from Halo a bit though. If the artwork does resemble Halo’s, the gameplay sets itself apart somewhat. Destiny will feature a huge, open-world type setting, with multiple planets available for exploration, including a post-apocalyptic Earth or a desolate Mars. Combat seems fast-paced and engaging, and players will take their single-player mode characters to the multiplayer modes, with all the weapon upgrades and unique customization options. Destiny is set to release on the 9th of September, with a beta phase planned for mid-summer. It’s currently developed for the Playstation 3, Playstation 4, Xbox 360 and Xbox One, and it’s being published by Activision.

For a better overview of what Destiny is all about, we’ve included a trailer for the game, as well as a screenshot gallery below. Take a look!

Old-school gamer with a cheeky tongue that gets me in trouble. When I'm not playing games, I'm writing about them, preferably in the vicinity of a fridge! Oh, and if you're a Justin Bieber fan, I'm afraid we can't be friends!
Previous Future Hitman movie adds Zachary Quinto to its cast
Next Kingdom Come: Deliverance Preview – New videos and screenshots