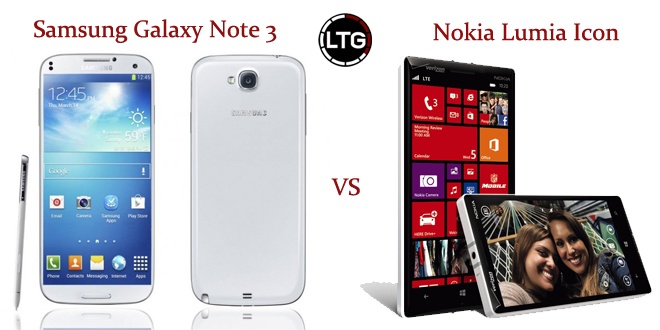 Samsung Galaxy Note 3 vs Nokia Lumia Icon – What to choose?

Today we’ll be looking at two of the best smartphones. The Samsung Galaxy Note 3, one of the Android flagships, and Lumia Icon, a high-end smartphone designed by Nokia. While Nokia Lumia Icon runs with Microsoft’s Windows Phone 8 operating system, Samsung Galaxy Note 3 runs on a heavily skinned Android 4.3 Jelly Bean, dubbed TouchWiz. Both of them representing two well-respected platforms, it’s not an easy task deciding which is best, but we’ll try anyway.

In what regards the price, the Galaxy Note 3 is not cheap, but this inconvenient should be overlooked considering the quality. A well built smartphone with very attractive looks, with an endurance rating of 75 hours, a camera that ensures both image and sound quality, the Samsung Galaxy Note 3 was created to satisfy the pickiest potential buyers.

Lumia Icon is easily considered a digital photographer’s delight, with its 20MP PureView camera with digital image stabilization, ZEISS optics, double LED flash and many other manual controls. The device is expected to produce great photos and videos, it’s been set to save two files for each shot: a full 19MP image for cropping or editing, that can be reframed later on to your liking, and a 5MP image, ideal for online sharing. The recording quality is also outstanding, with great sound even at high volume levels (80 dB), thanks to the four built-in microphones.

Nokia Lumia Icon’s 5 inch OLED display is a huge selling point for the device. The resolution is at 1080X1920, enabling the device to have a PPI of 441 pixels per inch. The super sensitive properties of the touchscreen gives the possibility to operate it with a pen or a fingernail, even through a glove.

While both devices are worthy of praise, considering image and sound quality and of course the large displays and sleek appearances, we’ll draw the line here and pay attention to the other aspects. Of course, the Nokia Lumia Icon may take better photos or record better, but Samsung Galaxy Note 3 surpasses every other feature. The Galaxy Note 3 is better designed and has better hardware performance, but the most important thing is that it has a much stronger battery, the endurance rating is 75 hours, compared to the Lumia Icon’s 40 hours. Regarding the software, the Android 4.3 Jelly Bean is very reliable, but Microsoft Windows Phone 8 is also very much appreciated, so in this case it all narrows down to your preferences.

So, if you’re in search for a new smartphone, you could be pleased with the Nokia Lumia Icon, but Samsung Galaxy Note 3 is a better choice.

I’m Load The Game’s co-founder and community manager, and whenever I’m not answering questions on social media platforms, I spend my time digging up the latest news and rumors and writing them up. That’s not to say I’m all work and no fun, not at all. If my spare time allows it, I like to engage in some good old fashioned online carnage. If it’s an MMO with swords and lots of PvP, I’m most likely in it. Oh, and if you’re looking to pick a fight in Tekken or Mortal Kombat, I’ll be more than happy to assist! Connect with me by email markjudge (@) loadthegame.com only
@@MarkJudgeLTG
Previous Heartbleed threatening OpenSSL’s reliability
Next Top 10 Best Free or Paid MMORPGs