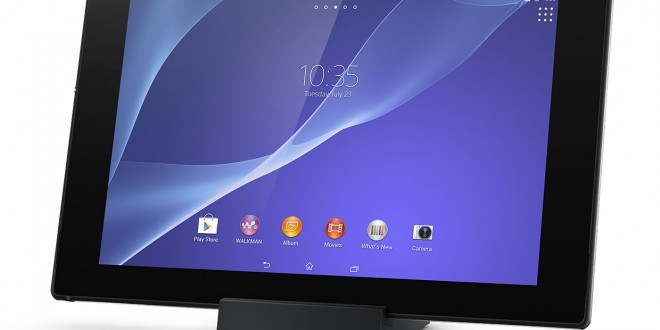 The original Xperia Tablet Z was already among the slimmest and most attractive tablets, but Sony did even better with the Xperia Z2 Tablet. It’s the thinnest and lightest tablet on the market, featuring the highest water resistance available, and its slimmer waistline certainly improves the looks even further.

Though water resistance is a big part of the Xperia Tablet Z identity, the Xperia Z2 Tablet and its predecessor are the only mainstream water-proofed tablets, Sony moves over the edge with the Z2. Its IP58 certification means it can stay under 1.5m of water for half an hour.

The Xperia Z2 Tablet has an aluminum skeleton that runs the perimeter of the device with a hollow center, bringing the benefits of a robust aluminum frame and plenty of room for internal hardware as the frame stays out of the way of components. This helped Sony to hit the stunning thickness of 6.4mm, making the Xperia Z2 slimmer than any other tablet on the market.

Sony followed the OmniBalance design language, with a slight change. Instead of the usual glass there’s soft touch plastic and the black is matte. But this change reduces weight and handles scratches better.

The tablet is very light, weighing only 439g, it’s very comfortable to hold in one hand for long periods of time. The bezels are a little bit large, but this isn’t really an inconvenient, this means there’s plenty of room to rest your fingers without obscuring the screen.

Featuring a Super AMOLED screen with 10.1 inch 1200 x 1920 LCD display and a pixel density of 224 pixels per inch, Xperia Z2 has a Live Color system to deliver rich colours which are, and this is an understatement, superb.

Apart from its visually incredible outsides, the Xperia Z2 Tablet also has impressive insides. The tablet has a 2.3 GHz quad-core Snapdragon 801 processor and 3GB of RAM. It’s one of the most powerful tablets on the market, taking things to the next level.

The audio performance was improved, compared with the Xperia  Tablet Z, with the inclusion of front facing stereo speakers. Though the front facing speakers aren’t standard on tablets, Sony sees a lot of sense in this change, given the amount of time people spend watching things on them.

The Xperia Z2 Tablet comes with a choice of 16 or 32GB of built in storage, but there’s also a microSD card slot, so you can boost that by up to 64GB more. For connectivity options there’s Bluetooth 4.0, Wi-Fi, 4G LTE and NFC, so it’s a well equipped device.

It’s better for photography than most tablets, due to its 8.1 megapixels main camera, though it’s a little large to use as your main camera and can’t compete with recent smartphone snappers anyway. It also has a 2.2 megapixel front facing camera and both cameras can film in 1080p at 30fps, which means it can do a reasonable job used as a web cam.

The Xperia Z2 tablet has a 6000 mAh battery, which is smaller than a lot of 10 inch slates, but enough for it to last for around 8 hours, so it’s quite reasonable even if it doesn’t quite go all day. You can always use the Sony’s Stamina mode if it drops too low and use it as much as possible before it dies.

There’s not much to say about Xperia Z2 Tablet’s interface, it’s much the same as it was on the Xperia Tablet Z and not very different from Android 4.4, having a clean, minimalistic design, it’s discrete, without many mechanism and boats. Its Walkman app is probably the only thing to take in consideration, even if it’s not the best reason to choose this tablet.

Even if the Xperia Z2 Tablet is a remarkable device, with sleek and elegant appearance, thin and very light compared to its competitors, there is a list of flaws you might want to check before you make a decision:

The Sony Xperia Z2 Tablet has a good screen and an attractive build, waterproof and with stereo speakers, it stands out from other flagship tablets. If the battery life was better, the screen was slightly higher resolution and the build was less plastic this would be the best slate on the planet, being a worthy successor to the Xperia Tablet Z.

I’m Load The Game’s co-founder and community manager, and whenever I’m not answering questions on social media platforms, I spend my time digging up the latest news and rumors and writing them up. That’s not to say I’m all work and no fun, not at all. If my spare time allows it, I like to engage in some good old fashioned online carnage. If it’s an MMO with swords and lots of PvP, I’m most likely in it. Oh, and if you’re looking to pick a fight in Tekken or Mortal Kombat, I’ll be more than happy to assist! Connect with me by email markjudge (@) loadthegame.com only
@@MarkJudgeLTG
Previous Loadout Review
Next Portable Gaming: Three Ways to Play Whilst on the Go