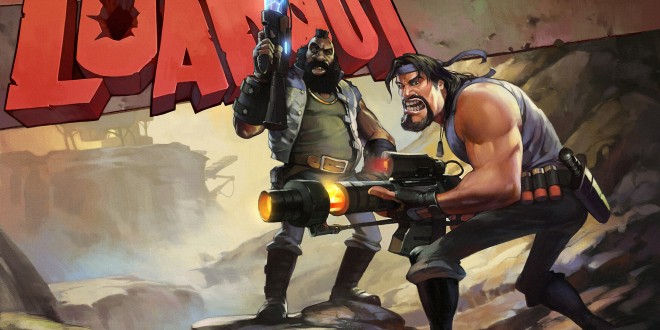 Edge of Reality’s Loadout has been recently released on Steam, and it’s completely free to pick up and play. As with any free-to-play title, it comes with a microtransaction system, but unless you feel the need to stand out and buy goofy outfits, there’s no real incentive to spend real money. So what’s Loadout? It’s a 3rd person shooter with some cartoonish graphics. It’s also what the lovechild of Team Fortress 2 and Borderlands would look like. But is it any good? That’s what we’re here to find out!

I’ve heard about Loadout several months ago, and have been keeping a skeptical but interested eye on it since. Interested, because it seemed really dynamic and funny, skeptical, because I had serious concerns about how well the game is balanced. Loadout’s name pretty much speaks for itself, as the game centers around a huge variety of weapons and weapon combinations. You start with 4 types of standard weapons: the assault rifle, the pulse rifle, the beam rifle and the launcher. And this is where the standardization part ends – once you’ve picked a chassis for your weapon, you’re given huge liberty in customizing it and modifying it to your needs and fantasies.

Do you want to turn the assault rifle into a shotgun? No problem! Change the barrel and the mag, gain some damage (at the expense of accuracy and the addition of spread), and you’re good to go! Want your standard rocket-launcher to become a hand-held mortar? Done! The possibilities are endless, and the combinations keep increasing as you level up. In fact, developer Edge of Reality stated that there are currently over 44 billion (yes, billion with a “b”) possible combinations, and the numbers are likely to grow as the game evolves. And this is where my concerns came into play. With so many combinations, it was impossible to test out each weapon properly, and I was worried that there would obviously be some overpowered combinations. Is this the case? Yes and no. There are definitely some extremely powerful weapons (anything with Pyro is extremely strong, mainly because the burning flames somewhat limit your vision), and there are some that feel weak. It certainly takes time to learn what works and doesn’t, and while it’s certainly better balanced than I would have expected, Loadout still needs major work on some of the attachments.

But is it fun to play? Most certainly! It’s mixture of violence, humor and fast-paced gameplay makes for a very addictive experience. Don’t be fooled by the cartoonish looks, this game is anything but innocent. Limbs are blown off, blood spills from every part of your dismembered body, and your legs seem to be able to keep running even without the upper half of your body being present. There are countless ways to die, and most of them are hilarious. It’s especially great to see how taking damage affects your character dynamically. I survived an encounter with just a sliver of health, after being burned by my opponents fiery bullets, on to run around the map with no skin left on my body. It’s brutal, and it certainly puts a huge grin on your face.

While a lot of detail has gone into the animations and atmosphere, the map-design wasn’t so lucky. It’s not that maps look bad necessarily, but they are extremely chaotic and it’s often hard to navigate them efficiently. There’s not a lot of diversity either, and I can’t accept a daytime and nighttime version of the same map as two distinct maps. The game modes are fun though, with various different objectives, from picking up crystals and gathering them while your team covers you, to a capture-the-flag type of game where the flag is in fact a very deadly hammer.

As with any free-to-play title, the question arises: is Loadout pay-to-win? For the most part, the answer is no. Weapons and attachments are bought with the in-game currency, which is gained by playing games and leveling up. The real-money shop sells customization features like clothing articles. The bad part is that the real money shop also sells XP boosts and in-game currency, which in itself wouldn’t be a problem. However, the matchmaking system is flawed enough to make it an issue, as you’ll be facing players with much more experience and higher levels. Weapon upgrades make a huge difference, and if you’re just starting out, you’ll have a hard time fighting guys that have been playing for a long time and have much better weapons. It’s not that you can’t get there, it’s just that it takes a lot of time, patience and rage management.

While we’re talking about negative aspects, it’s worth mentioning that the excessive bunny-hopping pulls the game back as well. It’s great that the developers added mobility features and the ability to dodge, roll and jump around the map, but when you can spam the space-bar while shooting your weapon, it can become frustrating. This is amplified by a somewhat obtrusive 3rd person camera, and it seems like mastering bonny-hopping is a huge part of being successful in Loadout.

To conclude, I had fun in Loadout, and continue to have it. I’m testing it out completely from a free-to-play perspective, without investing into gear. There are certainly flaws in the game, and Loadout can cause some exceedingly frustrating moments (especially if you’re playing the game’s ranked mode and your team-mates leave, forcing you to play a 1 vs 4 game of being spawn-camped). But, all things aside, it’s a fun game with decent visuals and great weapon diversity. You’ll be spending fun moments in the lobby, tinkering with your weapons and trying to find the perfect combination to blow people to bits or shock them into submission. I just wish Edge of Reality would have properly ironed out all aspects of the game before launching it, eliminating most sources of frustration and turning a good game into a great game.

Edge of Reality's Loadout has been recently released on Steam, and it's completely free to pick up and play. As with any free-to-play title, it comes with a microtransaction system, but unless you feel the need to stand out and buy goofy outfits, there's no real incentive to spend real&hellip;
Loadout Review
Loadout Review
Jacob Chambers

Loadout provides great fun, as well as frustrating moments. The weaponcrafting system is great and is decently balanced, and the game manages to look good through its clever use of violence and humor. Poorly designed maps, some balancement issues and excessive bunny hopping prevent it from achieving greatness though.

Old-school gamer with a cheeky tongue that gets me in trouble. When I'm not playing games, I'm writing about them, preferably in the vicinity of a fridge! Oh, and if you're a Justin Bieber fan, I'm afraid we can't be friends!
Previous League of Legends – How viable is a 6vs6 map?
Next Sony Xperia Z2 tablet review