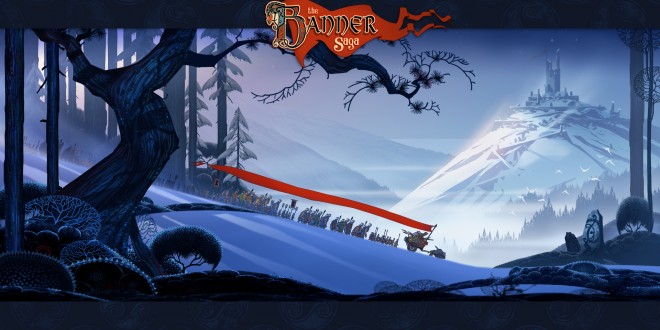 Taking risks and living with the consequences. That’s what the Banner Saga feels like, most of the time. Stoic’s universe seems to be carefully crafted from legends of old and faery-tales alike, and sets players into a deep, mature and deeply rewarding world filled with peril and battered-down warriors. For most of the time, you feel as if you’re not completely in control, as the very lives of the clansmen you are trying to lead is hanging by an invisible thread, a thread that snaps often enough.

The Banner Saga is definitely not a game that will appease the more action-oriented players. That’s not what it was designed for, and Stoic, the small studio behind the game, doesn’t seem to be concerned or bothered by this aspect. And that’s a great thing, too. This is an RPG crafted perhaps for a different generation and type of gamer, one that wishes to be taken into a far-away land of harsh realities and depth. And in this regard, The Banner Saga delivers. It’s not an exceedingly long game, lasting around 10 hours (give or take), and the ending might seem somewhat disappointing, but nevertheless, it’s one extremely satisfying experience.

The game shines with its combat system. The combat is designed as a turn-based strategy, and while its not overcrowded with a multitude of fancy skills, it certainly delivers. The complexity of the combat system comes not from diversity necessarily, but rather from difficulty and tactical decisions. It’s perhaps not as visually engaging as, say, XCOM: Enemy Unknown, nor is it too dynamic. In fact, for me personally, it rather felt like an elaborate game of chess. Every move you make and ever single skill you use will greatly influence the outcome of a battle, and even on the easiest of difficulty settings, the game can be frustratingly difficult at times. You simply can’t succeed by rushing in and taking on your opponents head-on. Doing so will result in your quick and irremediable demise, and without a save feature during battles, you’ll quickly learn that taking your time is essential.

That’s not to say the combat system of the Banner Saga is dull. Units have an armor rating and a strength rating. Strength is interestingly tied to health, so losing health will mean losing damage exponentially. On the other hand, you can’t afford to ignore the armor rating of units either, so you’ll have to plan you moves multiple turns ahead to be successful and victorious. Additionally, a Willpower system is added for extra benefits, but the resource isn’t quickly gained or regenerated, so risking a heavier hit through Willpower could result in your inability to use a skill later on. Overall, the combat system is definitely one of the best parts of The Banner Saga, but it certainly isn’t designed for the faint-of-heart or the impatient.

As far as visuals are concerned, you can’t really speak about the graphics of the game. Instead, you need to refer to the visuals as artwork and art. Because, The Banner Saga is artistic in every single way. Snow-covered mountain peaks, lush green fields or dimly lit inns are all masterfully crafted and make your mind wonder to the very period when Vikings roamed the Earth. I haven’t seen artwork this good in a very long time, and I commend the work of Stoic. Of course, one has to consider the background information too. Being an indie developer, Stoic certainly couldn’t afford to build a complex graphical engine for the game. They however did the smart thing, and instead of focusing on polygon-counts and fancy effects (that they most likely would not have pulled off successfully considering their budget), they went back to the basics of the brush and imagination. And the outcome is…poetic, if you will.

The game’s score is also extremely pleasant to the keen ear, but that hardly comes as a surprise, as the man behind The Banner Saga’s soundtrack is the well-known Grammy-nominated Austin Wintory. It’s not as good as the composer’s work on 2012’s Journey, but it’s certainly close enough, and the subtle music complements the game’s visual art perfectly. The only thing I really felt was missing was a solid voice-over for the game, as it definitely deserved it. The excruciating silence is quite a turn-off at times, and even the great score running in the background can’t make up for it.

On the minus side, the game does lack some refinement when it comes to information and the UI. There are a lot of features that are not properly explained, and you’ll have to figure things out for yourself. It’s hard to realize how morale works exactly, and the supply resource could have used more polish. The progression system can be tough at times too, and because of the lack of a save option (aside from the auto-save), you have nothing to fall back onto. This does help increase immersion, as it forces you to deal with the consequences of your choices, but it also can create frustrating encounters. The final battle was a terribly difficult one for me, as I’ve faced it with generally unprepared or hurt troops.

All the drawbacks can’t make the game any less enjoyable though. There’s beauty in how you are treated as a leader more than anything. You don’t get to build attachments to your characters too much, as they tend to die before they become likeable. It doesn’t take too long for you to realize that the game doesn’t focus on creating a story around a few core characters, but instead, makes you feel like a true leader, with the general good at heart and with inevitable casualties. Who are you going to sacrifice? Will you accept the help of some suspicious travelers, hoping to bolster your defenses, or will you turn them away fearing treachery? These elements forge a unique story for every playthrough, and you’re often left wondering what would have happened if you would have followed a different course of action. The Banner Saga may not be extremely long, but because of the importance of choices and the diversity they bring, the game throws a solid replayability factor on the table.

Overall, I felt satisfied with the game. It was a tale I will not quickly forget, and I’m certainly going to get back into it. It’s a solid game that proves that kickstarter projects are not necessarily bad. In fact, in cases like The Banner Saga’s, they are great. There are some minor nuisances, but they are not game or immersion breaking. Anyone looking for a solid TBS RPG or just a beautifully crafted story should definitely give the game a chance. It’s a Scandinavian world on the brink of collapse that needs exploring. And, like the cold and harsh world it portrays, The Banner Saga is certainly not for the faint of heart.

Taking risks and living with the consequences. That's what the Banner Saga feels like, most of the time. Stoic's universe seems to be carefully crafted from legends of old and faery-tales alike, and sets players into a deep, mature and deeply rewarding world filled with peril and battered-down warriors. For&hellip;
The Banner Saga Review
The Banner Saga Review
Jacob Chambers

A difficult and well crafted turn-based strategic combat system is combined with an engaging and memorable storyline. The artwork is stunningly beautiful, and the soundtrack is solid, memorable and never becomes boring or out of place. The game is somewhat pulled back by the unexplained systems outside of combat and the lack of voice-over. It is also relatively short.

Old-school gamer with a cheeky tongue that gets me in trouble. When I'm not playing games, I'm writing about them, preferably in the vicinity of a fridge! Oh, and if you're a Justin Bieber fan, I'm afraid we can't be friends!
Previous PS4 vs Xbox One console wars sales
Next Poker Star Fedor Holz Invests In Team EnVy And Dallas Fuel