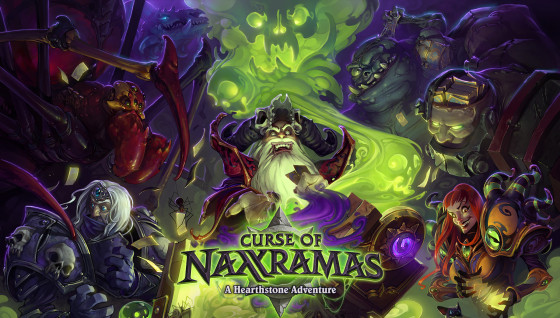 Curse of Naxxramas, A Hearthstone Adventure announced at Pax East

Blizzard has just revealed details at Pax East regarding the first single player Adventure Mode for their popular CCG, Hearthstone. Curse of Naxxramas: A Hearthstone Adventure will feature new cards, new game board, bosses and class-specific challenges among other things.

The name has a special meaning to World of Warcraft players, but I will make a short summary for those of you not familiar with Wow lore. Naxxramas is the base of operations for the lich Kel’Thuzad and was considered by many to be one of the most difficult raids back in Vanilla Wow. It was later moved to Northrend in Wrath of the Lich King where it also served as a raid but this time aimed at level-80 players.

Now it looks like we get to see the dungeon in yet another incarnation, this time in Hearthstone. Curse of Naxxramas will be a single player PvE Adventure with no level or class requirements that will feature a progression system. Once the gates of Naxxramas will be opened players must complete the first wing of the adventure before proceeding to the subsequent ones. The first wing  is called The Arachnid Quarter and will culminate with players having to tackle its boss, Maexxna.

The Adventure won’t be available all at once though. Over the course of 5 weeks the wings will open one by one and in order to gain entry players will have to purchase it with in-game gold or real money, except for the first wing which is free of charge. Although the Adventure won’t be completely free, Blizzard states that completing a wing will grant you a new Legendary card so a little investment seems well worth it.

A total of 30 new cards will be added with Curse of Naxxramas and they will not be dungeon locked, which means you can use them in your decks while playing other game modes. Boss battles will also be added, with each boss having their own unique cards and abilities so don’t go unprepared if you plan to face them.

Nine unique class challenges will also be introduced, these will award players with class-specific cards to add to their collection, if they manage to overcome them of course.  To top it all off Curse of Naxxramas will also have its unique game board to battle on while you’re playing the adventure. It looks like Blizzard wasn’t kidding when they said Hearthstone players will be enjoying a lot of new content in the near future!

A release date for Curse of Naxxramas hasn’t been set yet but it’s expected that the Adventure will come out simultaneously for PC, MAC and iPad. For more details you can read the original post on Battle.net.

I’m Load The Game’s co-founder and community manager, and whenever I’m not answering questions on social media platforms, I spend my time digging up the latest news and rumors and writing them up. That’s not to say I’m all work and no fun, not at all. If my spare time allows it, I like to engage in some good old fashioned online carnage. If it’s an MMO with swords and lots of PvP, I’m most likely in it. Oh, and if you’re looking to pick a fight in Tekken or Mortal Kombat, I’ll be more than happy to assist! Connect with me by email markjudge (@) loadthegame.com only
@@MarkJudgeLTG
Previous First Star Citizen gameplay footage revealed at Pax East
Next Blizzard introduces four new characters to Heroes of the Storm