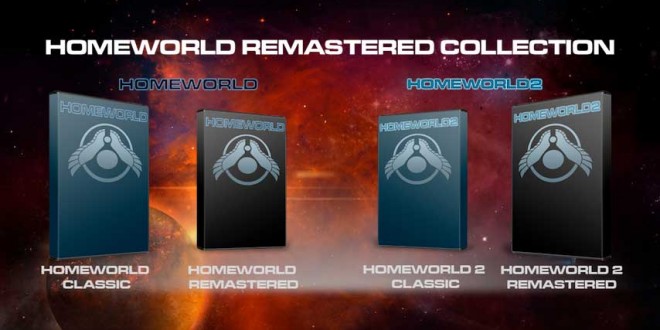 After THQ filed for Chapter 11 bankruptcy at the end of December 2012 most of their proprieties were either auctioned off or sold to third party developers. The highly acclaimed real-time strategy series, Homeworld was one of them. Rights to the franchise were bought by Gearbox Software for $1.35 million and now it looks like they’re planning to put them to good use.

Gearbox announced at Pax East today that they will be releasing a Homeworld Remastered Collection later this year. The collection comes with many improvements to Homeworld and Homeworld 2. Updated high resolution textures and models, new graphical effects and recreated HD cutscenes are just a few of them. The games are also said to be oriented towards high end systems and will be able to run in 4k resolution.  The classic versions will also be included, along with a 12” replica of the Mothership from the original Homeworld.

Steve Gibson, marketing director at Gearbox stated that the Collector’s Edition will come in very limited numbers  so be sure to grab one fast once it’s available for pre-order. The price is assumed to be around $100 based on the company’s website. However, no details were given during today’s Pax East panel so we don’t know for sure yet.

Homeworld Remastered Collection is estimated to be released this Fall on the PC. For more information on the game and its upcoming Collector’s Edition check out Homeworld’s official website.

I’m Load The Game’s co-founder and community manager, and whenever I’m not answering questions on social media platforms, I spend my time digging up the latest news and rumors and writing them up. That’s not to say I’m all work and no fun, not at all. If my spare time allows it, I like to engage in some good old fashioned online carnage. If it’s an MMO with swords and lots of PvP, I’m most likely in it. Oh, and if you’re looking to pick a fight in Tekken or Mortal Kombat, I’ll be more than happy to assist! Connect with me by email markjudge (@) loadthegame.com only
@@MarkJudgeLTG
Previous Virus Shield: A foolish mistake downloaded from Google Play
Next LG G3 recent leaks show a new flat UI and confirm rumors

With this video, gamers are introduces to what they can expect from Homeworld Remastered, and are also given some hint and tips as well.