Today I’m starting what will hopefully be a Hearthstone Decks series aimed at helping players climb the ladder. Each guide will be focused on a specific deck type for each of the classes, and will come complete with explanations, strategies, tips and more. Without further ado, let’s begin with my low budget aggro Hunter deck nicknamed “RushDown”.

The name says it all, this a very aggressive deck used for rushing down your opponents and finishing games quickly. This deck will be most useful for those who are looking for fast wins or for those who don’t have a wide variety of cards to choose from and need something cheap and efficient. This deck costs only 1.200 Arcane Dust to craft and doesn’t contain any Epic or Legendaries so it’s accessible to pretty much anyone. The card list can be viewed below: 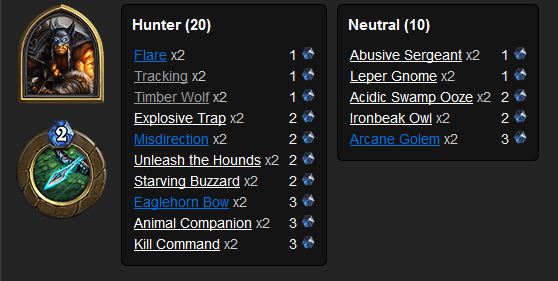 RushDown uses a very simple “go for the face” strategy, with most of your attacks being dealt directly to your opponent. Do not attempt to control the board as it will usually not work and you’ll just be wasting valuable time, remember that you must finish the match quickly, preferably before the late game. Don’t worry though, this deck has everything you need to make that happen, as you can see all the cards are low cost so you’ll be able to overwhelm your opponent in no time. RushDown mostly revolves around good Eaglehorn Bow and Unleash The Hounds usage but this is not a gimmick deck, every card has a clear purpose and you can win games without necessarily having to use those two cards. 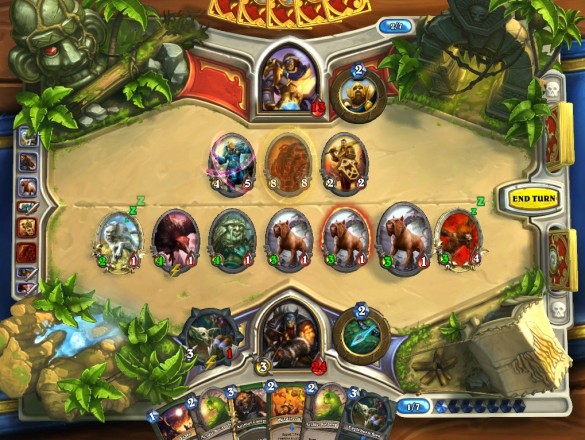 Starving Buzzard + Unleash The Hounds and Eaglehorn Bow + Secrets will be your bread and butter here. The bow gains +1 durability every time a secret is revealed, this includes your opponent’s secrets as well which means that with good planning you will be able to make good use of it for most of the match. Your own secrets also serve a double purpose, Explosive Trap provides some much needed AoE, while Misdirection can buy you time when you’re in a pickle, and can help get rid of large threats as well.

Starving Buzzard + UTH is a classic combo that can help you clear the board, and allows you to draw one card for each hound summoned. Unleash The Hounds can also be comboed with Timber Wolf or Leokk if you happen to get him, these two card can buff your hounds, as seen in the screenshot above. Arcane Golem + Abusive Sargent basically gives you a Leeroy Jenkins but without the disadvantage of giving your opponent two whelps, you will give him or her a mana crystal though so take care when using the Golem.

Tracking is useful when you need a specific card, while Flare provides you with card draw and it also comes in handy when you need to reveal Stealth minions or destroy enemy Secrets. Acidic Swamp Ooze is situational and only valuable if your opponent has weapons, useful against Warriors, Paladins or other Hunters using this type of deck. Ironbeak Own provides you with a way to silence enemy minions and also synergizes well with your other beasts.

Leper Gnome is one of the best 1 mana cost cards in the game, always play him during the first turn if you have it in your starting hand, your opponent will usually have trouble removing it without triggering its Deathrattle. Last but not least, Kill Command is a very good removal that can also be used to finish off your opponent, ideally it should be used with a beast in play. 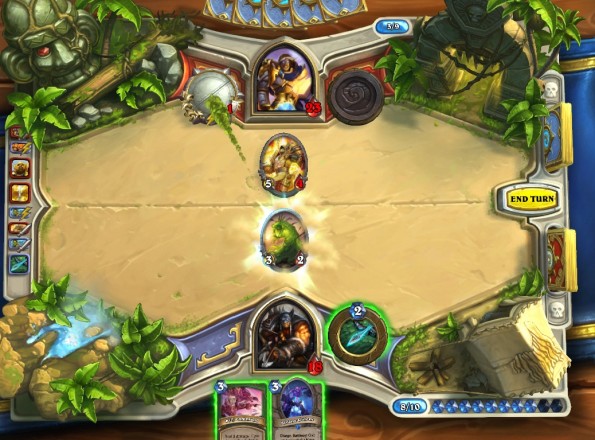 This deck will allow you to rank up very fast if you’re start low, but you might run into some problems against good players in the upper ranks. As with any deck, a lot of practice is needed and victory depends on the skill of its wielder and luck in some cases, but overall I found it to be a solid low-budget Hunter deck. Feel free to use RushDown in ranked and tell me how it goes, and of course do whatever modifications you deem necessary if you feel that you can improve it. As a side note, the second season of ranked play began today and a new card back has been awarded for those who obtained rank 20+ last season, for more info check the original post on Battle.net. 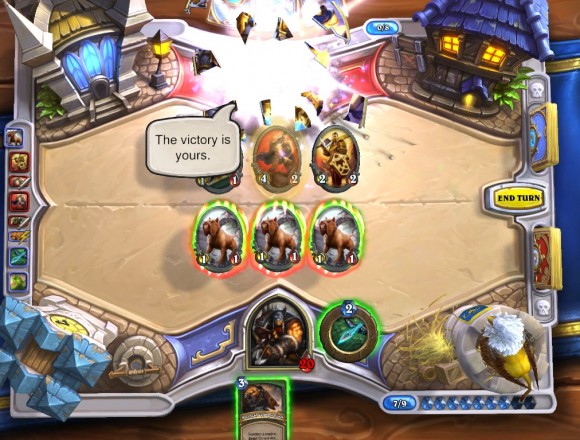 I’m Load The Game’s co-founder and community manager, and whenever I’m not answering questions on social media platforms, I spend my time digging up the latest news and rumors and writing them up. That’s not to say I’m all work and no fun, not at all. If my spare time allows it, I like to engage in some good old fashioned online carnage. If it’s an MMO with swords and lots of PvP, I’m most likely in it. Oh, and if you’re looking to pick a fight in Tekken or Mortal Kombat, I’ll be more than happy to assist! Connect with me by email markjudge (@) loadthegame.com only
@@MarkJudgeLTG
Previous Samsung Galaxy Note 4 vs. iPhone 5S – Future vs. Current Flagship
Next Call of Duty 2014 unveiling on May 4th, first screenshot revealed