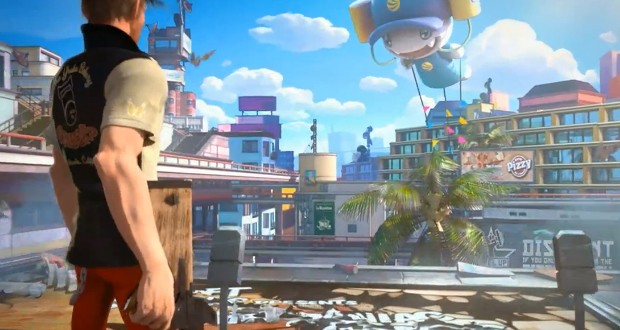 Insomniac Games, the people behind the Ratchet and Clank video game series has released it’s first gameplay video of their new game and IP Sunset Overdrive. The Xbox One exclusive is a third person shooter with focus on zone traversal and high-powered weaponry.

One of the key definition points of the game is, according to Insomniac, velocity as wall-running, spring boarding off of objects, rail grinding is required of players while also annihilating armies of mutants. Pre-ordering the game will give customers exclusive content, including a vinyl record firing gun called “Nothin’ but the Hits”, the “Hardcore! Hammer” Melee weapon and a character outfit that goes by the name of “It’s Me! Fizzie!”.

The video goes on to call the game Insomniac’s magnum opus as it is the product the devs have been going for since their inception almost 20 years ago. With the entire Ratchet and Clank game series under their belt, and only a few misses in terms of critic reception – the game FUSE  did not receive much praise – Sunset Overdrive promises an – at least – interesting gaming experience.

The launch of the game is set this fall bar any unexpected push backs.

I’m Load The Game’s co-founder and community manager, and whenever I’m not answering questions on social media platforms, I spend my time digging up the latest news and rumors and writing them up. That’s not to say I’m all work and no fun, not at all. If my spare time allows it, I like to engage in some good old fashioned online carnage. If it’s an MMO with swords and lots of PvP, I’m most likely in it. Oh, and if you’re looking to pick a fight in Tekken or Mortal Kombat, I’ll be more than happy to assist! Connect with me by email markjudge (@) loadthegame.com only
@@MarkJudgeLTG
Previous Minecraft for current-gen still limited
Next Meizu MX3 vs. Sony Xperia Z1 – Price and Specs Comparison