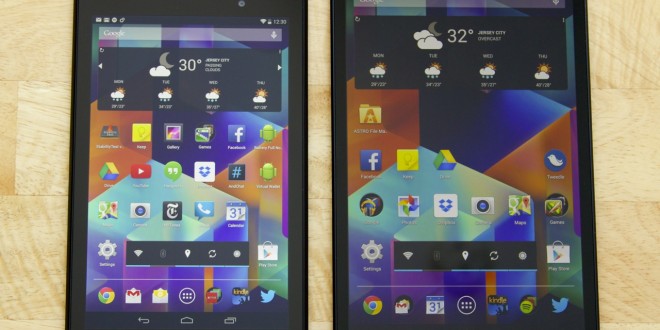 On today’s market, the Nexus 7 is probably the most popular 7-inch tablet that offers close to high-end performance for almost a budget price. The LG G 8.3 pad on the other hand can be a good alternative if you are looking for a new tablet with a slightly bigger form factor. Which one will prove the true winner of the 7-8in class? Let’s find out.

The Nexus 7 has been praised all over the net for its characteristics and small price tag. It may not look like much, having a modest, plastic design but on the technical part it’s anything but modest. Boasting a 7-in 1920 x 1200px resolution display at 323ppi, the Nexus 7 will provide you with a sharp screen for a superior multimedia experience. The Qualcomm Snapdragon S4 Pro chip with 1.5 Ghz quad-core Krait processor and 2GB of system RAM make it ideal for mobile gaming.

Depending on the model you’ll end up buying, the Nexus 7 comes with a 16/32GB internal storage but bear in mind that it has no card slot so you can’t expand it. Choose wisely. Also depending on the model, you can get an LTE capable one if fast internet connection is a must for you. The Nexus 7 offers a 5MP and 1.2MP camera that can be useful for some casual shooting or video chat. It’s powered by a 3950mAh battery that is non-removable but should keep you running for around 9 hours depending on usage. All in all a very solid package from Google that you can pick up for around $230, that’s of course for the 16GB model.

The LG G 8.3 has one obvious advantage over the Nexus 7 and that’s its screen size. The 8.3-inch 1200 x 1920px display at 273ppi is not a bad but it could have been sharper. For those of you obsessed with screen sharpness (like me) this might be a big minus. After all you will be staring at the screen all day long, so it might as well be perfect. Moving on with the specs, the LG G Pad 8.3 is equipped with a Snapdragon 600 chip and 1.7 Ghz quad-core Krait 300 processor. This is slightly better than the chip found on the Nexus 7, at least on paper. One small point for the LG. The 2GB system memory is a must in today’s smart devices but the LG G Pad 8.3 also comes with a card slot, something that is still considered an extra feature on some tablets.

The LG G Pad 8.3 only comes with 16GB of internal storage but the fact that you can expend it is good news indeed. It also comes equipped with a 5MP main and 1.3 MP secondary camera. Powering the tablet is a 4600mAh battery, again non-removable that should last for around 8 hours with above normal usage. The price of the LG G Pad 8.3 is around $330-350 but that may be understandable as the device comes with a better processor, bigger screen and a bigger battery than the Nexus 7.

The LG G Pad 8.3 and the Nexus 7 are both very good compact tablets. The biggest advantage of the Nexus 7 is its price, but in case 7-in is not enough for you the LG G Pad 8.3 might have what you need. If you can get the LG for a good discount then the two are on the same level. The micros SD support and bigger battery is certainly something to consider when choosing between the two. The other aspect that may work in favor of the Nexus 7 is its future OS updates, while the LG G Pad 8.3 might fall behind in time. If you’re considering buying one of these devices make sure you take these points also into consideration.

Tech enthusiast and RPG gamer, I've been surrounded by technology and PC hardware my entire life. I'm fascinated by anything mobile, and when I'm not tinkering with some newly released gadget, I love to immerse myself in the epic tales of Role Playing Games.
Previous Acer Aspire Switch 10 unveiled
Next Dark Souls 2 PC Review